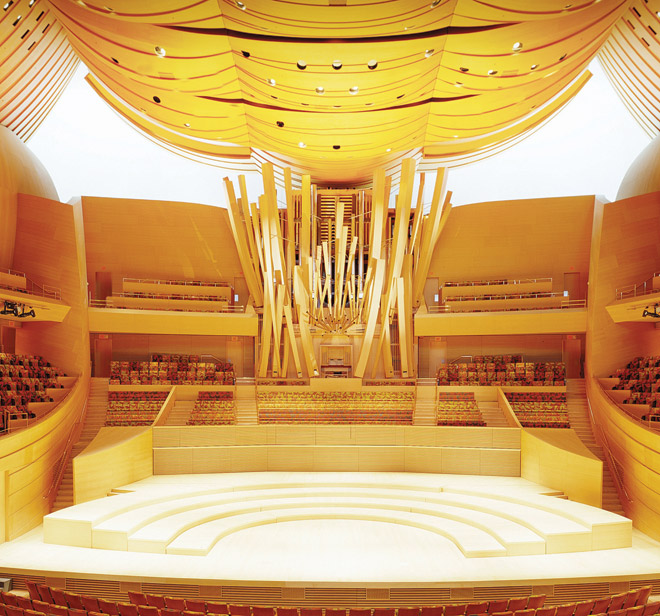 It’s appropriate that the traditional symbol for a ten-year wedding anniversary is aluminum. Frank Gehry’s 293,000-square-foot metallic “ship,” which opened to the public on October 24, 2003, is far more than a music venue. It’s proved to be an epic marriage of architecture and culture, the perfect union of big ideas and staggering details.

The 6,500 stainless steel exterior panels are stuck together with an acrylic foam adhesive that’s so powerful, it keeps the silvery skin intact without rivets. Inside, the 133,000-square-foot expanse of Douglas fir—the same wood used for the backs of cellos and violas—was custom designed by Gehry and acoustician Yasuhisa Toyota for optimal sound, like the kind LA Phil music director Gustavo Dudamel has brilliantly produced.

More noteworthy is the building’s broader impact. The concert hall, which will hold the LA Phil’s season-opening gala this evening, has become a cultural touchstone and motivated a sense of civic pride. The economic downturn may have derailed the megadevelopment plans along Grand Avenue (a project that was to include a Gehry-designed hotel), but with the opening of Grand Park last year, we’re enjoying one of the city’s most vital public spaces. Other structures built post-Disney Hall have seemed to emulate Gehry’s architectural swagger, including Thom Mayne’s Caltrans building and Coop Himmelb(l)au’s Ramón C. Cortines School of Visual and Performing Arts. Next up is the honeycomb-like headquarters of the Broad Foundation, featuring the art Eli and Edythe Broad (who were among Disney Hall’s benefactors) have amassed for 40 years. Now that’s commitment.