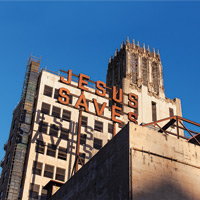 Despite a multimillion-dollar renovation, the Ace Hotel Downtown Los Angeles has kept the Jesus Saves sign out back. The owners of the boutique chain have a penchant for a good redemption story. The original Ace in Seattle was formerly a halfway house, its operation in Portland was the historic Clyde Hotel, and the popular Palm Springs location used to be a Howard Johnson hotel. The Ace’s debut venture in L.A. opens Monday in an 87-year-old high-rise with a back story that might top them all.

Built in 1927, the structure at Broadway and 9th housed the flagship movie palace for the United Artists Corporation, the pioneering independent film studio cofounded by Mary Pickford, D.W. Griffith, Douglas Fairbanks, and Charlie Chaplin. Pickford, inspired by a recent tour of European castles, hired architect C. Howard Crane to design the lavish interiors, including a 1,600-seat theater. United Artists shared several floors with Texaco, whose executives worked at the tower until 1958.

Film’s golden age faded and the oil biz moved elsewhere, but the movie house remained, playing primarily Spanish-language films for the neighborhood’s growing Latino population. In 1989, the televangelist Dr. Gene Scott took over the building and installed the Jesus Saves sign. The cigar-chewing Scott, who peppered his fiery sermons with profanity and pleas for money, died in 2005. Ace bought the property six years later.

Inside the 182 guest rooms, designer Roman Alonso and his team left the original concrete support structures exposed for an effect that’s more punk rock than Pickford. They covered the walls in Homasote, a green fiberboard that’s often used for soundproofing. (Rustic, yes, but also functional, since several of the rooms come with high-end turntables.) The former UA theater has been restored and reimagined as a live-music venue, with additional plans for a film program.

This stretch of Broadway has been a holdout in downtown’s decade-long overhaul. It has a unique street culture, with bustling marketplaces of wholesale jewelers and discount shops. The Ace, which caters to guests who can distinguish Paper from Wallpaper magazine, will likely change that landscape. Several upscale residential developments within a block of the new hotel are in the works, in addition to an Urban Outfitters. Gentrification is hardly a sin, of course, but it’s a shame when signature parts of a neighborhood can’t be saved.