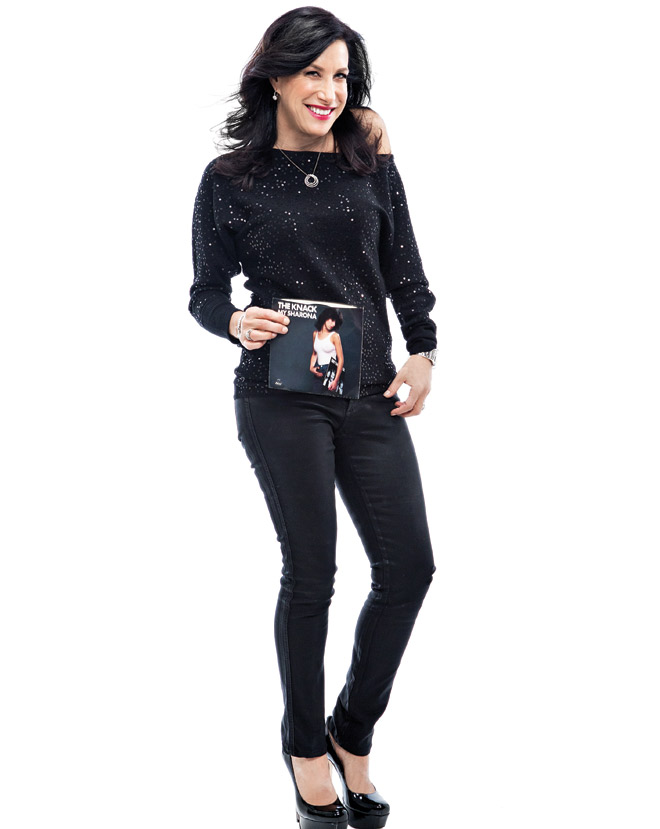 ➻ “I worked at a clothing store called Denise’s Place, and there was a lovely woman who came in and introduced her boyfriend. He said, ‘Hi, my name is Doug. I’m playing a showcase. Come hear us.’ And I said, ‘OK.’ Doug ended his nine-year relationship and told me we were going to be together one day. I was like, ‘Are you kidding? I am in love with my boyfriend, Marty. This is not happening.’ ”

➻ “Doug” turned out to be Doug Fieger, the late lead singer of the Knack, who claimed to have instantly fallen in love with Alperin, then a 17-year-old attending Fairfax High School. The band’s debut album, Get the Knack, was released in June 1979 and featured at least five songs inspired by Alperin, including “(She’s So) Selfish,” “Frustrated,” and “My Sharona.”

➻ “My picture is on the cover of the single. I was wearing my 501 Levi’s and a white top.”

➻ “The first time I heard ‘My Sharona’ I was watching them rehearse on my lunch break. I’m driving back to Denise’s Place and thinking, Did I just hear a song with my name in it? After that, I’d be sitting in Marty’s lap at shows, and Doug would be singing ‘my Sharona.’ If you can find a more possessive or obsessive word in the English language, let me know.”

➻ During a Knack concert with Eddie Money, Fieger persuaded Alperin to leave her boyfriend and tour the country with him. The rockers were singing Money’s “Two Tickets to Paradise,” and as Fieger belted the chorus, he pulled out a plane ticket to Hawaii in Alperin’s name. The couple was together for four years.

➻ Covered by more than 20 bands, “My Sharona” spawned Weird Al Yankovic’s first parody, “My Bologna,” and reached gold status (1 million copies sold) faster than any debut single since the Beatles’ 1964 “I Want to Hold Your Hand.”

➻ Alperin is now a real estate agent at Sotheby’s International Realty and is married with two children.

➻ “I remember, when I was a kid, hearing ‘Rhiannon’ by Fleetwood Mac and thinking, I would love to have a song written about me one day.”

RELATED: In the Wings: Rock ‘n’ Roll’s Most Inspiring Muses