Home Uncategorized Moby Photographed The Endeavour This Morning While We Watched 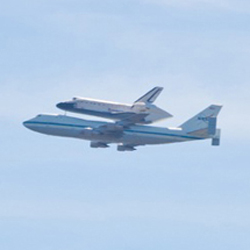 The space shuttle Endeavour made it’s loop-de-loop through L.A. this morning and millions looked up to see the ship glide through their neighborhoods on the back of a 747. The double-decker was accompanied by two F-16 fighter jets (like little bodyguards) and cruised above Hollywood Boulevard where I was staked out at Barnsdall Art Park. My original plan was to be at the official LAX event, and then I settled on Griffith Observatory to hang with the hardcore space nerds. After about an hour in LAPD and bomb squad-enhanced traffic listening to the panicked voices on the radio warning me away from the packed park I ducked south and watched from Frank Lloyd Wright’s Hollyhock house. Maybe a hundred folks were there; floppy hat seniors, dog walkers, a woman on rollerblades cruising behind a stroller, and they all gathered on the lawns waiting for the show. Camera buffs huddled under trees and scanned the skies and their electronic devices. “Somebody just tweeted they’re at San Luis Obispo!” one of them shouted. Every five minutes we got a “Vandenberg!” then a “Malibu!” and a young mom explained to her moppet that the spaceship on his shirt was about to arrive. When it took longer than expected somebody quipped “They’re going to have to transfer in Salt Lake City but they’ll get a hotel voucher and a meal so it’s OK.”  I was able to sneak a peek at the art deco observatory through a telephoto lens and watching the teeming masses clinging to the hillside I was glad to be with this ragtag bunch. “Lotta chemtrails in these skies today.” said a shirtless hippie before informing us all that music was the common language of the universe and that we should all join him for a global peace meditation at 6:30 p.m. tonight. The whole scene was very Night Of The Comet as fingers were raised to the sky and we got our first glimpse of the great white beast bounding up through the leafy canopy. The shuttle was enormous and graceful and crisscrossed the basin at least three times, a dramatic arc through downtown, riding low and slow under the crest of the San Gabriels before taking a dip behind the Hollywood sign, past Universal Studios then into Orange County and buzzing Disneyland. I sent my lousy iPhone pictures to some friends and got back these absolutely amazing images of the ship from Moby, who was directly under the flight path. Thanks, Moby! I owe you a trip to the California Science Center to see the shuttle in its new home next year.