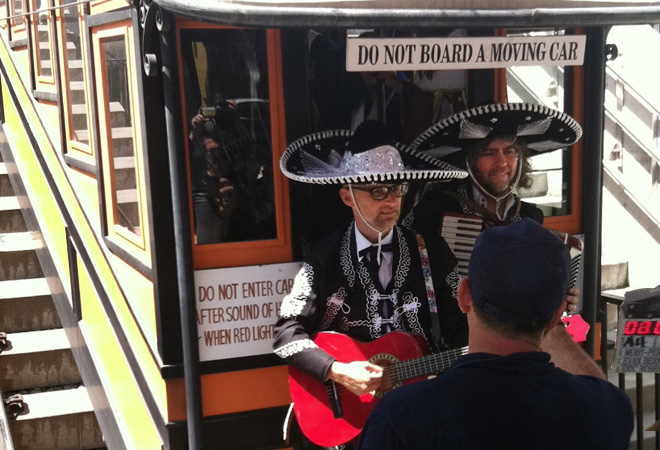 I was strolling down Hill Street towards Angels Flight and a saucy puppet show atop Bunker Hill this weekend when a film crew swarming the orange cars stopped me and asked me to wait. I tapped my toe and twirled my moustache, and noticed that it was Moby underneath that black sombrero. We traded some air high fives and when I caught up with him later he told me what he had been up to: “Wayne (Coyne from the Flaming Lips) and I play lost mariachis. We shot the whole thing within walking distance from 4th and Broadway. We used the escalator of the Metro and we were the only people in the station. People in L.A. don’t use public transportation. We shot in a really filthy alley with rats and poop and then this leather clad gimp jumps out from behind a dumpster. If I woke up with the plague, I wouldn’t be surprised. We were on the roof of this really anonymous government building, but on top it was like the rooftop version of an infinity pool. One of the actors was a Burning Man guy playing a biker, but he was also an architect and said this is where he comes to get building permits. It was a party with young and old and naked and everything.” Watch for The Perfect Life on Moby’s YouTube channel by the end of this month. Watch closely and you’ll see a ghost!