Home Uncategorized Is the LAUSD’s Take-Charge Superintendent Charging Off? 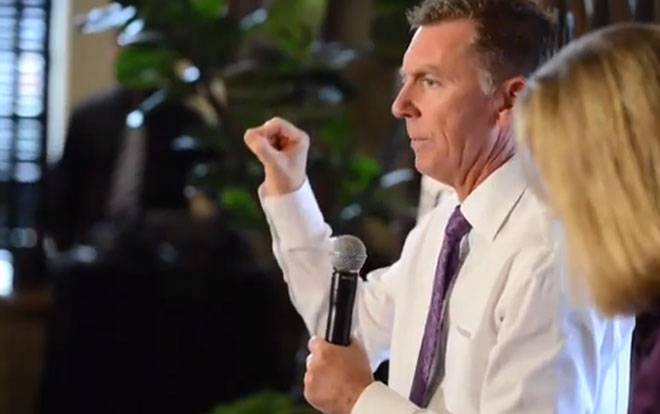 Deasy at a Los Angeles magazine event in 2012

Since taking over as superintendent of the Los Angeles Unified School District in 2010, John Deasy has knocked heads with the United Teachers Los Angeles. He’s stiffened the tenure process and weakened seniority rules. He’s shoehorned test-score data into teacher evaluations. He’s confronted school board opposition. Most recently, he’s continued to tout a $1 billion iPad initiative despite waves of criticism about the program. All of this Deasy has done, he says, to take up the mantle of Dr. Martin Luther King Jr: to fight for students’ civil rights. It was in this context that I absorbed today’s well-calibrated rumors that Deasy will announce his resignation effective next February, leaving after less than three years on the job.

For The Takeover Artist, a feature I wrote for the September 2012 issue of Los Angeles magazine, I followed Deasy during his first full academic year at the LAUSD. He told me that he estimated his transformational plan for the district would take eight years to execute. By the spring of 2012, as classes drew to a close, his stomach for such a prolonged battle wasn’t what it had been on the first day of school. The budget cuts, the sex-abuse scandal at Miramonte Elementary School, the growing opposition from the board, the mounting evidence that moral certainty was no substitute for making a coherent case—all of these stressors had their impact. When I pressed Deasy about the parts of his program that seemed so at odds with reality— that in 2016 all LAUSD high school students would graduate UC and Cal State ready or not graduate at all, for example—the veneer of confidence was stripped away. “Hey, I can give you an interview that would be beyond depressing and beleaguered,” he said. “You want beleaguered?”

“You’ve got a board that overwhelmingly wants to push us into a direction that would prevent almost anything from happening,” he said. “You’ve got no finances. You’ve got unions whose number one strategy is ‘stop,’ and then take me out. I get that.”

If the rumors turn out to be true, it will be Deasy who takes himself out, not the school board, which despite being even more oppositional than before has showed itself perfectly willing to renew his contract. Even Deasy’s $1 billion iPad buy, though embattled now, passed the board 6 to 0. What he’s up against is far cry from the police dogs, fire hoses, death threats, and violence faced by the civil rights leaders of Alabama, and yet I wonder how he might see a resignation through the prism of civil rights—whether it might be the equivalent of King abandoning the African American community of Alabama a few years after the bus boycott to perhaps find a pulpit someplace else where the climate of oppression wasn’t so severe and the chances of success more favorable.