Home Uncategorized How to Document the L.A. Life in Five Minutes or Less 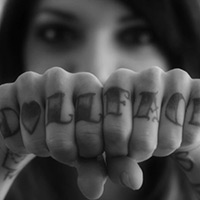 You’ve heard of rock docs and mock docs—now meet the “micro-mentary.” Director and editor Jeff Consiglio and his creative partner, director and cinematographer Alexandre Naufel, have released a series of documentaries to counter the Hollywood-heavy stereotype of Los Angeles. The clincher? Each documentary is less than five minutes long. “We were originally looking to do a feature documentary,” Consiglio says. “We had a whole bunch of great ideas, but we didn’t have the time on our schedule to tackle a feature. All of the sudden the term ‘micromentary’ was created.”

Record Collection, their ongoing series of micromentaries, depicts the small moments of various Angelenos’ lives, from climbing a tree to drawing a circle. “Everything is moving so fast; everything gets bigger and faster and louder every day of our lives,” Consiglio says. According to both directors, Record Collection is an attempt to slow things down and show an alternative to the Hollywood cliché. “This is a celebration of these Angelenos – our friends – who aren’t necessarily in the business.”

“These people started out as people we had great access to,” Naufel says. “We knew their stories very well. Joe [from Joe Washes His Chessmen, posted below] is my buddy. We play chess all the time. One time I said to him, ‘Joe, these pieces are filthy. You need to wash them.’ He said, ‘ok,’ and I said ‘really? Ok I’m going to film it!’” The absence of plot may sound banal, but the result is a compelling meditation of L.A. life.

Record Collection is currently comprised of 10 micromentaries. The beauty of the series (in addition to the cinematography) is that the subjects make a conspicuous attempt to be, well, inconspicuous. “These things are like therapy for us now,” Consiglio says. “It just makes us feel better. For the subjects too. They love it. They know they’re not sitting in the hot seat. They’re doing something they love – or doing something silly. They don’t try and be awesome – they just are awesome.”

Both filmmakers believe the series would have come out entirely different if filmed in another city – say D.C. or New York City. Each micro-documentary focuses on one or two people (and in the case of the video posted below, one or two cats), but the city itself is always lingering in the background as an unseen supporting character.

“I think what comes through in these stories is the city – the environment itself. If we were to do the same ten films in different cities they would be different,” says Naufel, “but hopefully the city would come through the people.” Need some voyeuristic therapy? Check out the video below.