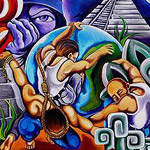 To mark the July 10th premier of new FX show The Bridge—a thriller-drama in which a U.S. detective (Diane Kruger) and a Mexican detective (Demian Bichir) must fraternize to catch a serial killer working on both sides of the border—the network hosted a national art contest for the Latino American art community.

Amateur Latino artists in Chicago, Houston, L.A., Miami, and New York were asked to submit works depicting the mutual collaboration between Latino and American cultures, all in the name of $1500 (and the honor of having their mural erected in a public space).

L.A.’s victor, as judged by renowned muralist El Mac, Executive Director of The Mural Conservancy of Los Angeles Isabel Rojas-Williams, and Executive VP of Marketing and On-Air at FX Network Stephanie Gibbons, was Homeboy Industries’ own Fabian Debora. “My friend said, ‘Hey why don’t you try and submit something for this mural competition,’ and I said I’d take a look at it,” Debora says. “So I submitted one of my previous paintings that I did in 2008, titled Look Within. It ran parallel to what [FX was] looking for—that Chicano feel of Mexican-American art.” Here’s a peek at his winning concept: According to Debora, his inspiration for the piece was the loss of identity. “Being that I’m Mexican-American and fluent in Spanish, living in a city like L.A. is like being in a culture shock,” he says. “But Pre-Colombian imagery is so embedded in our culture that it gives you a sense of identity. This image represents the struggle of the Mexican-American people and how it is very difficult to be raised in the U.S.”

Debora’s piece will be unveiled at The Bridge Mural Contest event on Sunday, July 7th, at 3912 Whittier Boulevard. Guests can arrive any time between 12p.m. and 3p.m. to see Debora’s artwork in the flesh, and he couldn’t be more thrilled about receiving such distinction. “To be able to win something like this contest is milestone,” he says. “It gives me a glimpse that my art is starting to make an impact and become recognized, and that I too have something to offer to this art world.”