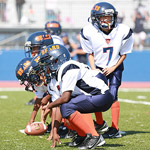 We’ve got some news that is sure to make you feel all fuzzy-wuzzy: LAPD’s Community Safety Partnership has teamed up with the Housing Authority of the City of Los Angeles to coach the Watts Bears, a football team for seven-, eight-, and nine-year-old boys from the Nickseron Gardens, Imperial Courts, and Jordan Downs Public Housing Developments.

Conceived in 2012 and coached by LAPD officers Keith Mott, Cesar Rivera, Sergio Sanchez and Grant Goosby, the activity provides an outlet for kids who may not have had the chance to play football otherwise. Bolstered by the surrounding community—parents and neighbors who have volunteered as Team Managers, Team Moms, and Team Dads—Mott, Rivera, Sanchez, and Goosby are hoping to present and instill a variety of character building qualities in their players, including discipline, teamwork, and friendship.

The Bears’ next game is this Saturday, August 31st, at 9:30 a.m. at Narbonne High School. And while they may not have pushed it over the goal line last weekend (our boys lost 27-0), we’re sure they’d benefit from some local support—so head out to Harbor City and cheer on those Bears.