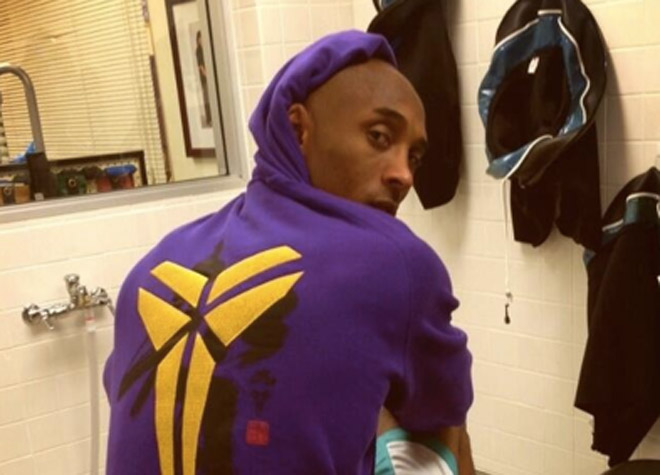 This week served the Lakers (43-37) a crucial slate of crunch-time games, as the L.A. squad continues to vie for the eighth West Coast playoff spot over the Utah Jazz (42-38). Kobe Bryant, as he has been doing for the latter half of the season, willed his team to three crucial wins: one against New Orleans on Tuesday, one over Portland on Wednesday and one last night against the Golden State Warriors.

The Warriors came to Staples Center swinging, with Stephen Curry sinking 22 points in the first quarter and spearheading what looked like a toppling road win. But—cue the fourth quarter: Kobe notched 12 points in nine minutes and helmed a high-octane comeback (aided, surprisingly, by a Pau Gasol triple-double) that looked like nothing more than classic Black Mamba. A nine-point deficit was soon made up, and with the game at 109-107 and a little more than three minutes left to play, Bryant pulled a move on Harrison Barnes that he’s used over the years to smoke a long list of defenders. But upon driving to the basket, he stopped short. Crumbling to the hardwood, Bryant clutched his left ankle and called a timeout. Clearly in pain from an injury, he limped to the free throw line (Barnes fouled him on the play), sunk two shots, and was promptly escorted to the locker room for medical attention.

Speculation spread like wildfire as viewers and broadcasters turned to past injuries, over-playing and freak accidents as possible causes of Bryant’s collapse. The game went on. The Lakers topped the Warriors, 118-116. The win, however, was overshadowed by the breaking news of Kobe’s probable torn Achilles’ tendon, and those affiliated with the league reacted instantly:

Questions about Kobe’s prognosis and career arose immediately. Some were practical. Did Kobe believe he had in fact torn his tendon? The answer: yes. Some were hopeful. One reporter in the post-game presser asked if Bryant, considering his impressive history of willing his body to overcome unlikely odds, thought he could bounce back—this season.

“I can’t, I can’t even walk,” he said. “This is a new experience for me.” He looked crestfallen.

The Lakers will have to trudge on, hosting the San Antonio Spurs tomorrow. Bryant is scheduled for an MRI today, but the team is calling the injury a probable and complete tear. Needless to say, having the team’s star out of the picture has taken the wind out of the Lakers’ sails.  Even if they do make the playoffs, battling a No. 1 seed will be nearly impossible without Bryant on the floor.