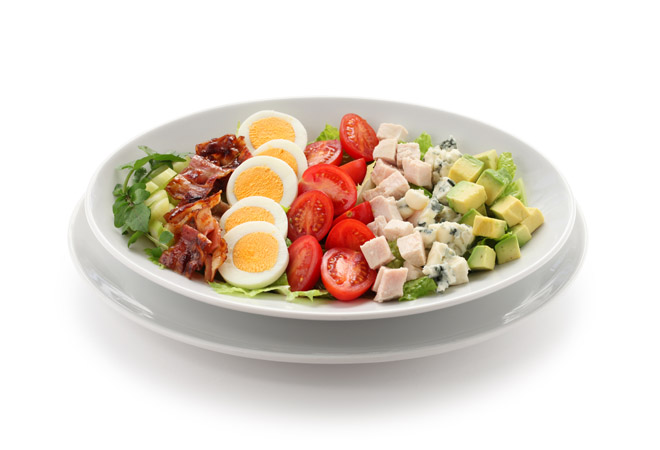 The Cobb Salad is a great microcosm  of L.A. history recalling abundant crops of once exotic foods like avocado, celebrity culture, the beginnings of California cuisine, and the scrappy beginning of a restaurant success story.

Herbert Somborn teamed with Bob Cobb to open the tiny hat-shaped Brown Derby restaurant across from the chic Ambassador Hotel in 1926. The earliest menus feature low-rent fare like hamburgers, liver and onions, and a Denver omelet.

By the 1930’s, Cobb was hobnobbing with the likes of theater impresario Sid Grauman, when he invented the Cobb Salad. Poking around the kitchen after hours one night, he combined turkey, bacon, Bleu cheese, egg, tomato, avocado, and greens to create the famous dish.

The Derby grew to include locations in Hollywood, Los Feliz, and Beverly Hills and the salad became a staple of the celebrity clientele and the tourists that came to dine near them. Watch the Hollywood At Last episode of I Love Lucy and you’ll see what I mean. The restaurant became the locus of celebrity culture in mid-century and fancied itself up with Filet Mignon and Lobster Thermidor.

The spot grew up alongside the movie industry in the boom years of Los Angeles. A replica Derby at Disney World in Florida still serves the original recipe, but versions of it still appear on menus all over the city.