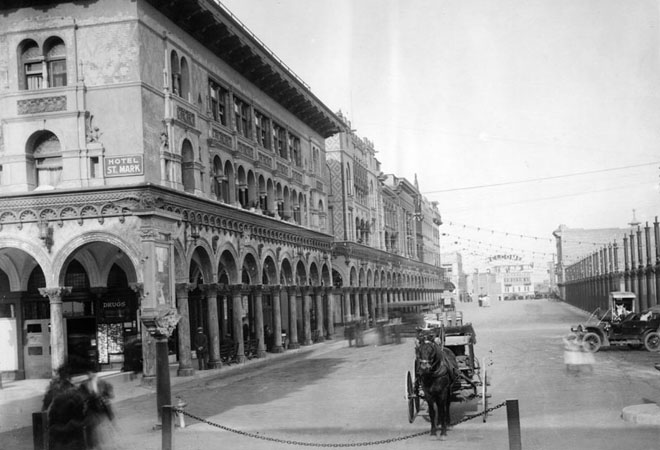 The sand dunes and salt marshes south of Santa Monica might have seemed an unlikely place to launch a cultural renaissance on the West Coast. But that’s precisely what Abbot Kinney envisioned for the tract when he set out to create a resort town there in 1904. The great Italian city of Venice, after all, was built on similarly marginal land.

Though it’s best known today for its countercultural associations, Kinney envisioned Venice-of-America as a place where high culture and invigorating ideas would meet the masses of the growing middle class. Inspired by the Chautauqua movement, Kinney founded the Venice Assembly and built a 3,400-seat auditorium where poets, opera singers, and public intellectuals would perform and give speeches. To reinforce the resort town’s lofty aspirations—and to make housing more attractive to buyers—Kinney and his architects evoked the look of its Renaissance-era namesake through the built environment. Colonnaded arcades fronted the hotels on Windward Avenue (pictured above circa 1906), and a system of canals complete with picturesque footbridges replaced the typical street grid.

On July 4, 1905, Venice-of-America opened to the public with great fanfare. Forty-thousand curious visitors strolled down the wood-planked pier or toured the subdivision by gondola. After the first two hours, realtors reported that they had sold 355 lots. But while Venice-of-America proved a financial success, it failed to live up to Kinney’s cultural goals. Tourists simply couldn’t be persuaded to sit through the Venice Assembly’s arts programming. Instead, they flocked to a miniature railroad, camel rides, and midway games.

A savvy developer, Kinney bowed to the inevitable. Within a year of the town’s opening, he had dissolved the Venice Assembly and added even more popular amusements. Gone were the sounds of opera and oratory, replaced by the screams of roller coaster riders.