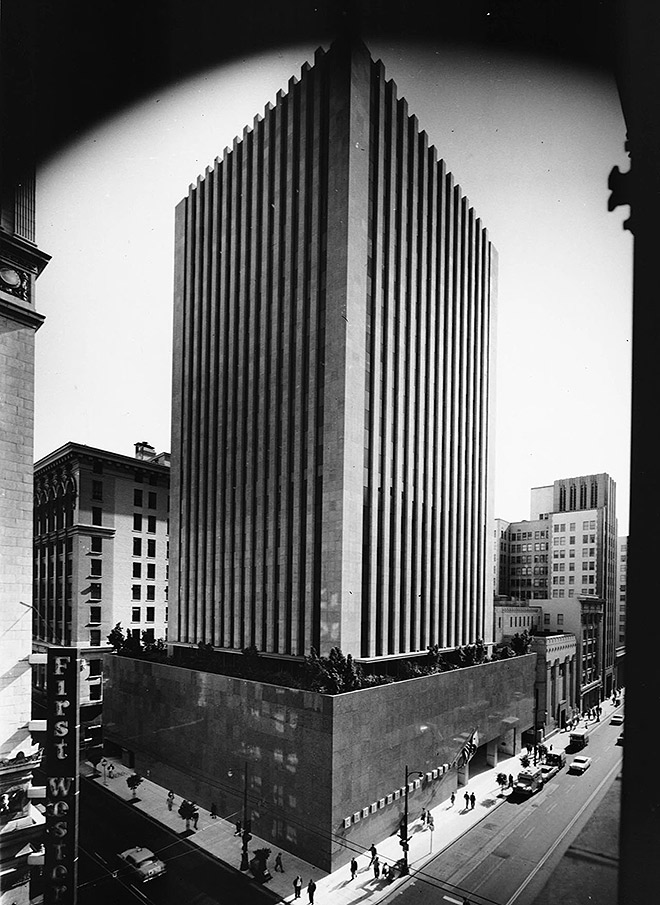 In 1960, the California Bank Building at Sixth and Spring was a glistening architectural triumph—the tallest commercial building in Los Angeles and the city’s first truly modern skyscraper. So why would its namesake tenant abandon its new home only 13 years later?

Spring Street was still the “Wall Street of the West” when California Bank broke ground on its new headquarters in 1958. The firm clearly meant to stay. It sunk $15.5 million into the structure and hired one of L.A.’s most celebrated architects: Claud Beelman, who designed a sleek tower that rose from a three-story granite pedestal.

Most notably, the bank took advantage of the then-recent repeal of a 1904 ordinance limiting building heights to 13 stories or 150 feet. Its headquarters’ 18 stories soared 267 feet over the pavement below. It wasn’t the first building to eclipse City Hall in height—that would come in 1968 with the Union Bank Plaza—but it did usher in a new era of high-rise construction in Los Angeles.

Unfortunately for the California Bank Building, most of that construction would take place several blocks west of Spring Street. By the end of the ‘60s, the city’s financial district had relocated to newly redeveloped Bunker Hill, and in 1973 United California Bank deserted its still-gleaming headquarters at Spring and Sixth for an even taller, 62-story skyscraper at Wilshire and Hope—today’s Aon Center. The high-rise at Spring and Sixth, meanwhile, endured several decades of decline before a controversial 2008 renovation gave the old offices new life as residential lofts.