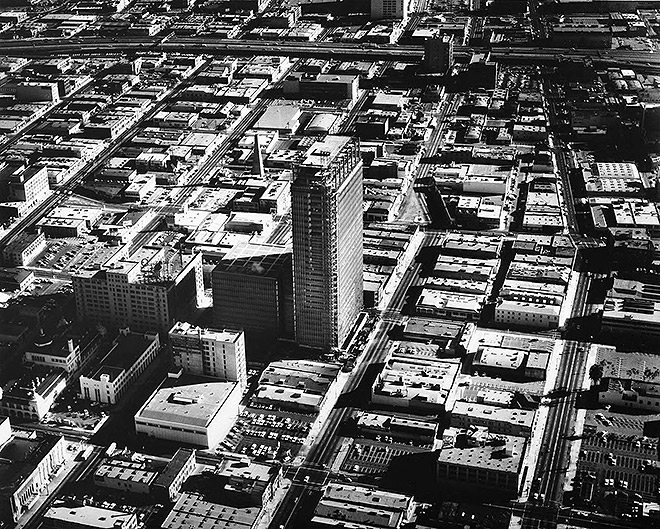 Why does the AT&T Center stand aloof from the rest of L.A.’s downtown skyline? Shortly before it opened in 1965 as the Occidental Center Tower, the Times compared it to a “Sequoia in a stand of lodgepole pine”—and little has changed since. Most of the city’s tallest buildings crowd around Bunker Hill, but a mile away at 12th and Hill, not a single high-rise challenges the AT&T Center’s 32-story, 452-foot command of the sky.

When the Occidental Life Insurance Company broke ground on its new headquarters in 1961, true skyscrapers had been legal in Los Angeles for only five years, and no one knew where they would ultimately congregate. The southern fringes of downtown seemed as likely a place as any. For Occidental and architects William Pereira and Gin Wong, the new tower was a bet that relatively cheap land and easy freeway access would lure development to downtown’s south.

Built in Pereira’s characteristically futuristic style, the Occidental Center Tower was city’s second tallest building upon its completion in 1965, second only to City Hall. It featured a rooftop helipad where, it was thought, helicopters would whisk executives to the terminals at LAX. On the 32nd floor, a fine-dining restaurant—appropriately named The Tower—offered sweeping city views for a price, while an observation deck two stories below was free and open to the public. From either vantage point, it was obvious by the end of the ‘60s that Occidental and Pereira had misplaced their bet, as a cluster of steel skyscraper frames climbed skyward, a half-dozen blocks to the north on Bunker Hill.

Above: The Occidental Tower rises on the southern fringe of downtown Los Angeles in 1965. Courtesy of the USC Libraries – Dick Whittington Photography Collection.