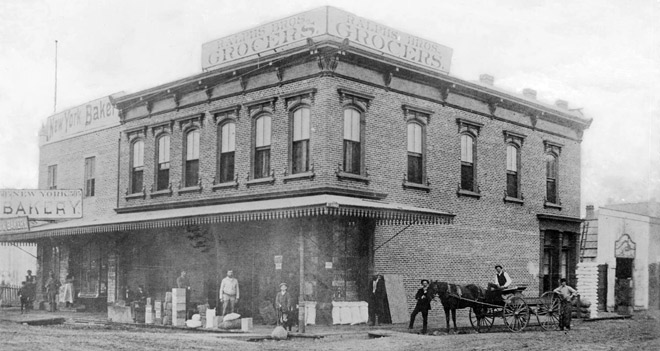 It’s not sloppy punctuation. It might come as a disappointment to indignant Southern California grammarians, but an apostrophe has never graced the name of Ralphs supermarkets. The regional grocer takes the last name of its founder, George A. Ralphs, a master bricklayer who turned to the grocery business after losing his arm in a hunting accident. Ralphs teamed with S. A. Francis in 1873 to open the Ralphs & Francis store at Fifth and Hill in downtown Los Angeles. Two years later, Ralphs’ brother Walter bought out Francis’ share, and the business became the Ralphs Bros. Grocers.

Specializing in locally sourced produce, the business boomed. In 1876 they constructed a two-story building—complete with a hitching rack in the back for horses—on the southwest corner of Sixth and Spring. Pictured here in an 1885 photograph from the USC Libraries, the Ralphs Bros. grocery store became a hub for everyday commerce. Many Angelenos could reach the store on foot, while farmers drove in from the countryside, their wagons loaded with staples like grains, butter, bacon, and eggs that fed the booming city.

As Los Angeles grew, so did its leading grocery business. In 1901 the store moved to bigger quarters a block south on Spring Street, and in 1911 Ralphs became a chain with the opening of a branch store at Pico and Normandie.

Successful in business but unlucky in sport, George Ralphs died in 1914, crushed by a boulder while hiking in the San Bernardino Mountains. His survivors, meanwhile, continued to grow the chain. It remained a family-owned company until 1968, when the Ralphs family sold to Federated Department Stores. Today more than 200 Ralphs supermarkets, operating as a division of the Kroger Co., serve Los Angeles and environs.

Nathan Masters of the USC Libraries blogs here on behalf of L.A. as Subject, an association of more than 230 libraries, cultural institutions, official archives, and private collectors based at USC and dedicated to preserving and telling the sometimes-hidden histories of Los Angeles.