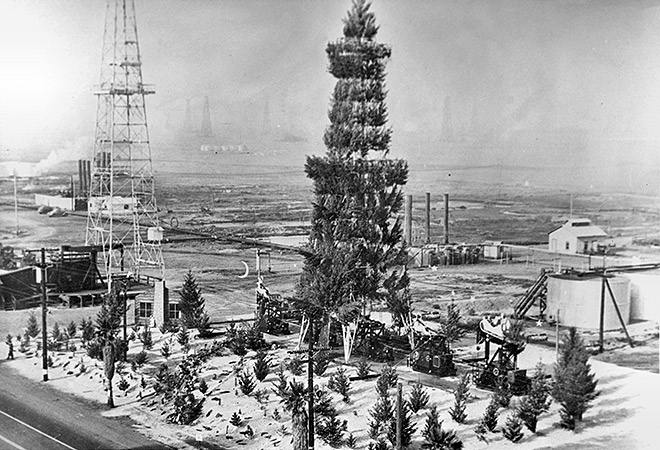 It was a Christmastime scene that could have warmed the heart of even the most hardened fossil fuel extraction firm.

A 127-foot steel derrick masquerades as a Christmas tree, its trusses clothed in dozens of pine saplings and strung with colored lights. On the ground below, the glow of the twinkling bulbs reflects off several tons of lime, crushed into a powder as white as snow. And in the air, Santa Claus and his eight flying reindeer bob up and down in a rhythmic motion as the horsehead pumps they sit upon sip crude oil from beneath the Huntington Beach tidelands.

Southwest Exploration Co. spent nearly $5,000 in 1939 to turn one corner of this usually bleak coastal oil field into an uncanny winter wonderland. Santa Ana-based Macres Florists supplied the young pines, planting some of them in the lime beneath the derrick to create a forest of Christmas trees. Motorists who cared to pull off Pacific Coast Highway for a closer look could have admired a small brook running through the artificial grove, its babble joining the hiss of steam and clanging of machinery to compose a novel holiday tune.

Above: Photograph courtesy of the Orange County Archives.