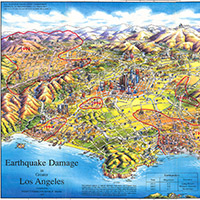 There has been much talk about earthquakes since the January 8th release of the California Geological Survey Earthquake Zone map of the Hollywood quadrangle. That map shows the Hollywood fault passing right under some rather large new developments in Tinsel Town (which could easily become Tinkertoy Town if a big one hit).

By law, development is prohibited on top of faults; until November last, city officials had been using outdated charts, and so the developments were allowed to proceed. When new ones—slated to be published later this year as part of the Priolo Earthquake Fault Zoning Act—are adopted, building along that line will have to stop. What area does that limit, exactly? Think Franklin down to Hollywood from Gower west to Cahuenga.

Many argue that it’s near impossible to live anywhere in Southern California without being close to a fault line, but the widely accepted truth—one Californians wear with a strange badge of pride—is that one cannot be a true Angeleno unless he or she has lived through at least two earthquakes. Just because we own the disasters doesn’t mean they’re pleasant, though—I have lived through four big ones and live in a house on stilts, so I qualify as one of the terrified.

The compilers of the map shown here are serious scientists: Robert P. Masse and James W. Dewey are experts on determining epicenters and locating sources of quakes working with the USGS. Using the pictorial form, this map gives a visual description of the destruction caused by the larger earthquakes that have struck greater L.A. While the brutal 1971 Sylmar earthquake does not appear here, it is covered somewhat by the same area that was devastated by the Northridge earthquake, which ripped through the area twenty years ago this Friday.

The albatross of impending earthquakes has long hung over the heads of the residents of this area. Father Crespi even mentions a shaker in his diary as the Portola expedition passed along the Santa Ana river in 1769 (estimated at 7.3). In 1812, the San Juan Capistrano Mission collapsed in a sizeable quake which killed 40 people, and in 1857 the largest recorded earthquake (Fort Tejon) ripped through the basin, but the small population at the time kept the casualty count low.

The Long Beach Earthquake of 1933 (a seemingly modest 6.4) resulted in 120 deaths and destroyed so much property it set forward building standards that continue to this day. The other big ones here are Sylmar at 6.6, Whittier Narrows at 5.9, Sierra Madre at 5.8 and Northridge 6.7.