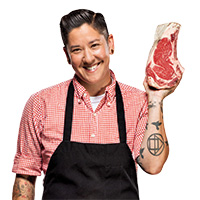 ➻ “We only accept whole animals at the shop. Most other butcher shops—99.9 percent of them—do not do that.”

➻ Born in Tokyo and educated at the French Culinary Institute of New York, Nakamura apprenticed upstate at Fleisher’s Meats before coming to Los Angeles. She and Amelia “Lindy” Posada opened their shop, Lindy & Grundy’s Meats, in the Fairfax District, in 2011. By using every part of the animal, they aimed to fill the void of sustainable butchers in the area.

➻ “There are certain groups of people that prefer some of the more particular things. We have a large raw-food community that shops for organ meats, especially livers, which are rich in iron. Chinese herbalists and acupuncturists will have clients who have a low iron count shop with us, too.”

➻ “We think about how many animals are being raised on a farm, how much water do they have, do they have access to pasture at all times or do they not? It’s all about the conditions. It’s about what they’re being fed.”

➻ Butchers in ancient Egypt wore high heels to help them step over the gore.

➻ “We have a paid apprenticeship program. People come in, and within a two-month period learn to butcher an entire animal.”

➻ “It should take no longer than two hours to break down a steer that’s hanging, about three hours if done on the bench. Typically we get 100 percent grass-fed steer that are about 700 to 800 pounds.”

➻ There are close to 6,000 butchers in the Los Angeles area, according to the U.S. Bureau of Labor Statistics. Most of them work in grocery stores.

➻ “I use a handsaw or a hacksaw or a knife. It’s all done by hand. In that sense, it’s an old school way of doing it.”