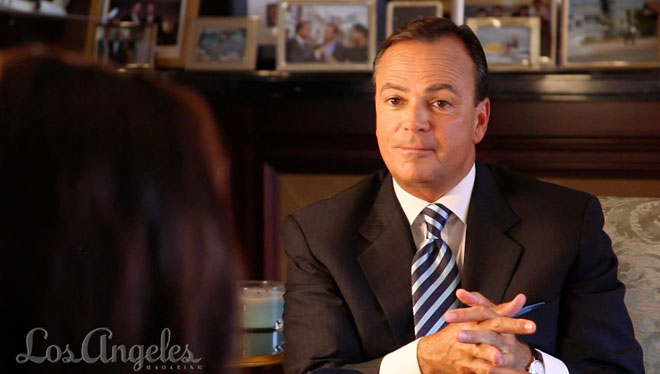 In the eighth episode of “Big Shots With Giselle Fernandez,” our video series featuring business leaders and culture shapers from around the globe, Fernandez sits down with L.A. native Rick Caruso, the CEO of Caruso Affiliated, the real estate company that developed, owns, and operates the Grove in Los Angeles, the Americana at Brand in Glendale, and a handful of other mixed-used properties in Southern California. Caruso opened 8500 Burton Way, a residential and commercial project near the Beverly Center, last year.

Aside from his wealth (Forbes estimated his net worth to be around $850 million in 2012) the USC alum stands out for his civic engagement. He has served as the president of the Police Commission and as a commissioner of the LADWP—but despite plans to launch a mayoral campaign in 2012, Caruso sat our most recent election out.  Still, he assures Fernandez he remains committed to improving the quality of life for Angelenos.

On his advice to mayor Eric Garcetti:
Risk your job everyday. Don’t worry about your job. Worry about serving the people. Put your job at risk, take some tough stances, do some innovative things. Not everything’s going to work, and you may not be the most popular, but I’ll tell you, if Eric Garcetti figures out the traffic problem he’ll be the king of the world.

On his vision for the Grove’s trolley to travel beyond the confines of the outdoor mall:
I told our team we would get this done. The first stage that I wanted to do is connect the Grove and LACMA. That’s very do-able, and once it connects to LACMA and proves itself—which it will—I’ll connect it to my competitor down the street, the Beverley Center. [It’s about making L.A.] a more livable city, a more interesting city, a more fun city to live in.

On L.A.’s diversity:
Here’s the frustration I have with the city of Los Angeles: I think [it’s] the greatest city in the world but the greatest city in the world has not figured out how to evolve and embrace the diversity it has… People want to live and socialize and play and work closer to home. They want more of a sense of community…but our planning process in the city doesn’t allow or support that. That’s what we need to change.

On his last minute decision not to run for mayor in 2013:
We had commercials cut. We were way down the road. The way I analyzed it, at the end of the day there was a slight hesitation on [my] family’s part, which is fine. I get to be a dad once; the mayor’s office comes around every four years. If there’s another opportunity down the road and it makes sense and there’s a meaningful role for me to play, fine.

On changing his political affiliation from Republican to Independent:
I think that the Republican Party in the state of California in particular needs to reinvent itself and for some reason hasn’t shown the ability to do that. And the democrats need to make some changes. Let’s get rid of the labels and figure out how to engage people and find solutions.