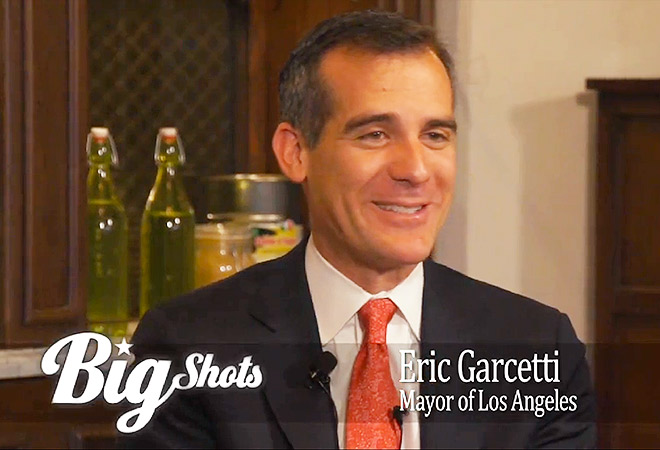 In the second installment of Big Shots: Eric Garcetti, the mayor shares his thoughts on city planning, our struggle with identity, the private vs. the public sector, and a potentially major overhaul of a traveler’s LAX experience.

On serving the City Council vs. serving as mayor:
“Well I’m really enjoying executive power! I kind of liken being the president of the City Council to a group therapist. You have to sit around, manage people’s expectations, learn their personalities…I really loved it, but it’s a lot of energy towards just keeping things functioning…just to get a valet parking ordinance for the Hollywood area literally took four and a half years. As the mayor you pick up the phone and tell somebody to do it. And the next day if it’s not done, you say, why is this not done yet?”

On Angelenos embracing our identity:
“We’re looking to rebrand L.A. Not in some sort of radical way, but we’ve forgotten to sell this city, internationally and nationally…it’s important for us to say who we are. I’ve always said at the airport for instance, you arrive and you have no sense that youre in Los Angeles.”

On an LAX makeover:
“I’ve always said at the airport for instance, you arrive and you have no sense that you’re in Los Angeles. I’m working with Penny Pritzker, the Commerce Secretary who’s tasked with…[making] our airports more friendly. Well, we talked with Bob Iger at Disney. He’s helping us shorten the lines. I want to have Disney characters or great bands or food trucks parked [outside]—L.A. should hit you when you arrive here, and instead we hide it.”