Home Uncategorized Back to Basics: Why the Academy Awards Should Return to the Music... 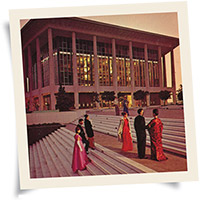 Oscar night used to be cinema’s coolest cocktail party—not a glitzy PR campaign. For those golden years the Academy should thank the Los Angeles Music Center, the opulent performance space that’s celebrating its 50th anniversary this year. Designed by Welton Becket and Associates in 1962, the center’s modern structures were intended to be a “crown jewel on the top of the hill that could be visited by everyone,” says Bruce Becket, the famed architect’s son. These gems include the Dorothy Chandler Pavilion, one of L.A.’s most elegant venues and home to the entertainment industry’s top honors off and on from the ’70s to the ’90s. Named for the wife of former Los Angeles Times publisher Norman Chandler, the pavilion is where Charlton Heston missed his cue because he got a flat on the freeway, Sacheen Littlefeather rejected Marlon Brando’s award for The Godfather, and a naked man upstaged David Niven. But the appeal is more than nostalgia: The building’s clean lines and creative legacy would give the show some much-needed groove.

Oscars Picks: Here’s Who Should Take Home the Big Prizes This Year