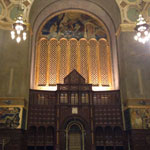 What does the Los Angeles campus of Wilshire Boulevard Temple have in common with iconic structures like the Griffith Observatory, Dodger Stadium, City Hall, and the Bradbury Building? It has been lovingly restored by Levin & Associates Architects principal Brenda Levin. The architect was on hand Wednesday when the press was offered a sneak peek at the temple’s refurbished 1,658-seat sanctuary and a still-under-construction outdoor space, both of which are scheduled to be completed before the Jewish High Holy days begin this fall. “I’ve been really fortunate to work on major buildings in Los Angeles,” said Levin, “and the ones that give me the most pleasure are the ones that bring community together. This is a very internally-focused spaced, but it is as awe-inspiring [as Griffith Observatory] and very spiritual and moving for me.”

Construction plans for the temple, which was built in 1929—largely with funds from early Hollywood big wigs like the Warner brothers and film producer Irving Thalberg—don’t end there: the restoration of the original building is just phase one in a ten year, $160-million project that will eventually see the addition of new learning centers, a sports complex, a 500-space parking lot, and a community service center that will serve all of the temple’s neighbors, on the block between Hobart and Harvard boulevards. Before a tour, Rabbi Steven Z. Leder told the assembled media the project was conceived to meet the physical, spiritual, and communal needs of the city. “OK,” he said, “you’re going to see something miraculous.”

Will a Pair of Beloved Jewish Summer Camps Rise from the Ashes of the Woolsey Fire?