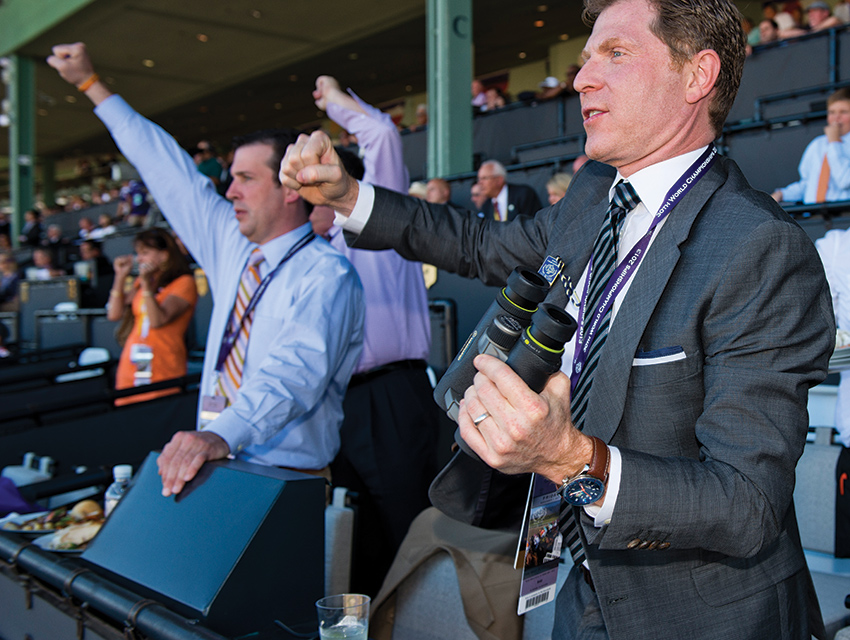 Celebrity chef Bobby Flay is well known for his competitive spirit. And it’s not only because he loves “throwdowns”—Flay pits his cooking prowess against challengers yet again in the latest foodie game show named for him, Beat Bobby Flay. The Iron Chef is famous, too, for his enjoyment of horse racing. The owner of 24 restaurants, including his latest creation, Gato, in New York, Flay also has a stable of 25 Thoroughbreds. In July, his involvement in racing reached new heights when he was elected to the Breeders’ Cup Board of Directors.

“My goal is to make the event better and more spectacular every year,” he says. Flay has the expertise in hospitality, entertainment, and television to deliver. In fact, he has served on a committee charged with ramping up the fanfare to match the Breeders’ Cup’s world-class status since he was elected to the Board of Members and Trustees four years ago.

“One of the great things about horse racing is that it’s not just a race. It’s an experience,” says Flay. “I was lucky enough to win,” he notes, referring to when his horse More Than Real won the 2010 Breeders’ Cup Juvenile Fillies Turf (an occurrence that Flay famously cited as “probably the most exhilarating moment I’ve had in my life except, of course, when I had my daughter”). “It’s a big deal,” he says. “After the jumping up and down is over, it’s important to toast the winners in a big way.”

That’s why victorious owners are escorted to the Champion’s Terrace for a champagne toast with lavish desserts, photo opportunities, and race replays. “We want people to really enjoy their moment,” Flay says. There’s also the Breakfast Marquee, a luxurious trackside meal from which participants can watch their horses’ morning workout, a nod to Flay’s dawn visits to see his fillies excercise, when he says, “it’s perfectly quiet except for the thundering of their hooves.”

Grandest of all is “A Taste of the World,” a food and wine party Flay hosts the night before the races. Participants from around the world enjoy the cuisines of celebrated international chefs. “The idea is to break bread and have good conversation about international racing,” Flay says, “basically, before we ‘go to war’ [on the track] the next day.”

Going forward, Flay plans to further enhance the owner experience. “That’s really the most important thing, and that’s what I hope to do,” he says. “I want everybody smiling.”