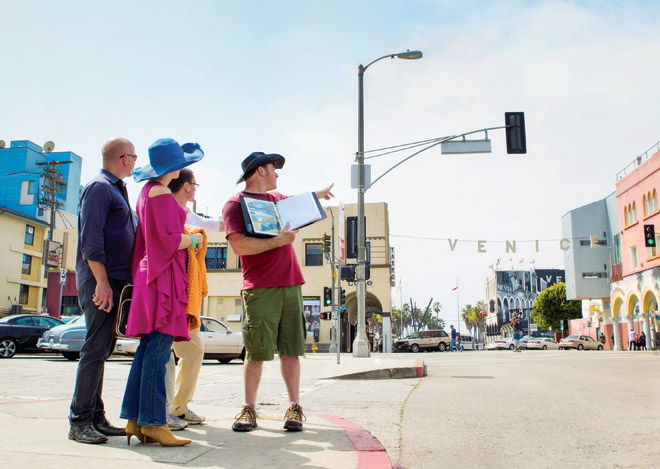 Jonathan Kaplan shows off the corner of Pacific and Windward avenues in Venice.

It may be an odd assertion to make about a city so closely associated with the automobile, but the most revelatory way to experience L.A. is on foot. The walking tours that follow aren’t just for out-of-towners looking to discover the grit beneath the glamour. They also delve into neighborhood nooks and crannies, giving intrepid locals a new angle on the past. Clip on the pedometer, grab a water bottle, and lace up your sneakers to travel across the cityscape and back to another era.

Brick and Mortar
Since 1978, the Los Angeles Conservancy has been preserving the city’s history one Walker & Eisen building at a time. The nonprofit offers a slew of excursions, but its Historic Downtown Walking Tour will have you looking at the city’s core in a new way. From Pershing Square, guides with encyclopedic knowledge head off with groups on two-and-a-half-hour outings to see beaux arts and deco edifices—as well as a couple of murals—normally glimpsed through a windshield. You even get to wander inside such architectural gems as the Pacific Mutual, Southern California Edison, and Bradbury buildings. » Saturdays at 10 a.m., $10 ($5 for L.A. Conservancy members), reservations recommended.

By the Sea
Jonathan Kaplan is a one-man multimedia show, playing movie snippets on an iPad at almost every stop on his two-hour Vintage Venice Reel to Real Tours. A history buff’s history buff, he describes the texture of life at Abbot Kinney’s onetime beachside amusement park. Starting at Windward Circle by the old post office, the longtime Venice resident takes visitors around canals once navigated by gondoliers, pauses at the intersection where Charlie Chaplin’s Little Tramp made his first appearance (1914’s Kid Auto Races at Venice), then heads past Rip Cronk murals to the site of the original Venice Pier. » Daily, $25-$50, reservations required.

House Calls
Meet in Sycamore Grove Park by the Sousa-Hiner Bandshell (where both bandleaders performed) for the Highland Park Heritage Trust Tour. The docent-led excursion lasts two hours and 15 minutes and takes you inside gorgeous Craftsman homes from the turn of the 20th century, including the sunny Ziegler Estate (now a day care center). Residents sometimes offer anecdotes before the trek, which ends at the art gallery Avenue 50 Studio. » Bimonthly, Saturdays at 10 a.m., $10 ($5 for HPHT and L.A. Conservancy members), reservations required.

Hollywood Forever
Once you get used to wearing a headset for Red Line Tours’ Hollywood Behind-the-Scenes stroll, you’ll appreciate being able to hear your guide above the din of Hollywood Boulevard. After learning the details of every foot, hand, and nose impression at the Chinese Theatre, you might peek into the Stella Adler Theatre’s speakeasy, which is now used for private events. The two-hour jaunt begins and ends in the courtyard of the grand 91-year-old Egyptian Theatre. Want to sneak into the projection room? Sign up for the hour-long Historic Egyptian Theatre Tour. » Hollywood: Daily, $24.95, reservations recommended. Egyptian Theatre: One Saturday a month, $5.

Valley Ho
The Museum of the San Fernando Valley is still at the idea stage. For now there’s the Historic North Hollywood Tour. Meet at the statue of Amelia Earhart (a onetime Valley resident) at the North Hollywood Recreation Center, where historian Richard Hilton leads walkers on a two-and-a-half-hour trip replete with tales of long-gone ranchers (Lankershim was a busy guy). The brochure alone—filled with archival photos taken by the Weddingtons, one of the region’s most influential families—is worth the trip. » Bimonthly, Saturdays at 10 a.m., $10 donation, reservations required.