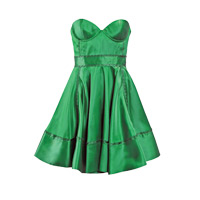 Los Angeles is the mother lode when it comes to clothes, shoes, and accessories from bygone eras, whether it’s the 1920s Jazz Age or the ’80s New Wave explosion. There’s no shortage of stores that collect items shed by a populace expert at defining a style and then moving beyond it. Do you want to channel Clara Bow? Cary Crant? Carly Simon? We sifted through racks and bins to help narrow your search.

The 1920s
Sure, you’ll find 1950s Galanos party dresses and ’60s Pucci minis, but if it’s the Roaring Twenties you’re after, head to The Way We Wore, a vintage institution owned by L.A. Frock Stars’ Doris Raymond. The high-end boutique is chockablock with beaded and gold lamé numbers to outfit a hundred Garbos. » 334 S. La Brea Ave., Mid City, 323-937-0878.

The 1930s
Paper Moon Vintage draws inspiration from the Harold Arlen song and the Victorian trend of shooting portraits in front of cardboard crescent cutouts (the store has a studio set up for customers). In addition to art deco velvet frocks and faux-silk fascinators for women, gents can find Edwardian suits and straw boaters. You’ll be period perfect for that in-store photo. » 4516 Hollywood Blvd., Los Feliz, 323-666-6009.

The 1940s
From padded-shoulder suits fit for Joan Crawford to pinup numbers à la Lana Turner, Playclothes evokes an early studio wardrobe room filled with camera-ready ensembles. Men will be impressed by the selection of Hawaiian shirts from the ’30s and ’40s as well as by the dressier flat-front pants and suspenders. » 3100 W. Magnolia Blvd., Burbank, 818-557-8447.

The 1950s
A giant warehouse of women’s clothing, Shareen Downtown is sectioned off by decade, so when scouting for Mad Men looks—from Betty Draper hostess-with-the-mostest frocks to conservative Peggy Olson shirtdresses—you’ll know where to turn. The space has no dressing rooms, so only gals are allowed inside. » 1721 N. Spring St., downtown, 323-276-6226.

The 1960s
Lemon Frog Shop bursts with the floppy hats, platform shoes, and trippy dresses—adorned with rainbows and mushrooms—of the psychedelic era. The rustic jewelry and slouchy handbags are typical of the times that were a-changin’. » 1202 N. Alvarado St., Echo Park, 213-413-2143.

The 1980s
Yes, it’s official: The ’80s now qualify as vintage. At Sielian’s, however, gems that include items from Azzedine Alaïa and enough Christian Lacroix to satisfy Ab Fab’s Pats and Eddy transcend the parade of neon that characterized those years. No wonder stylists from Vogue Italia and celebrities like Evan Rachel Wood splurge here. » 9013 Melrose Ave., West Hollywood, 310-246-9595.

Timeless
Haute design reigns at Decades, founded by former cabaret singer Cameron Silver. By elevating the concept of vintage, he brought it out of the thrift shop and into the realm of couture. Silver trades in museum-quality pieces, the kind Oscar hopefuls wear on the big day. » 8214 Melrose Ave., Beverly Grove, 323-655-1960.