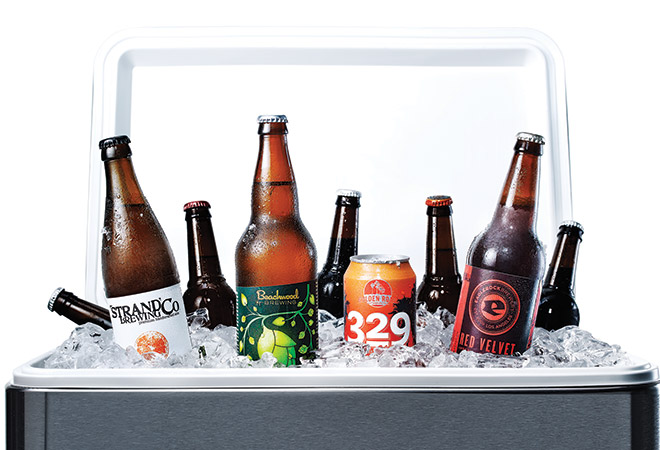 Harvest Ball Orange Wheat
This unfiltered Belgian-style witbier—brewed with coriander, orange blossom honey, and orange zest—was originally made for Strand’s fourth anniversary last year. A generous dose of wheat brightens the concoction and makes for a lighter body that’s ideal for an alfresco lunch of, say, tangy spinach salad with fresh chèvre.
How to drink: Bottles, growlers, and on tap.

Lazy Susan
Something’s brewing in a back room at the Hermosillo, York Boulevard’s wine and beer tavern: a new craft beer hub. Expected to open by this month, Highland Park Brewery already has buzz, thanks to brewmaster Bob Kunz, formerly of Father’s Office and Craftsman Brewing. The Lazy Susan is a deliciously sour, prickly Berliner Weisse-style wheat beer spiked with peaches and nectarines.
How to drink: On tap.

Chaparral Saison
Local wildflower honey—with hints of the wild sagebrush that grows on the coastal hills surrounding Ladyface brewpub—is a key component of the crisp, farmhouse-style ale. The saison yeast strain used for fermentation adds clove and pepper notes as well as a faint earthiness that creates a superdry finish.
How to drink: Growlers and on tap only at the brewery.

Red Velvet
With a dizzying alcohol content of 10.8 percent, the gold medal winner at the 2010 Great American Beer Festival isn’t everybody’s first choice for slugging when the mercury is high. But the big, malty red ale—redolent of toffee and perfumes of grapefruit, pine, and raisins—pairs well with anything coming off the grill.
How to drink: Bottles, growlers, and on tap.

329 Days of Sun Lager
Mass-market lagers (think Budweiser, Miller, and Coors) rely on being crisp and refreshing rather than flavorful, but Golden Road’s new release strikes a wonderful balance. Mildly toasty, with a slight bitterness at the end, this easy drinker cools you right down. And since L.A. averages 329 days of sunshine a year, Golden Road is making the beer available year-round.
How to drink: Cans, growlers, and on tap.

Melrose IPA
A citrusy hop bomb, Beachwood’s Melrose IPA will be available July 1 at plenty of L.A. beer bars and bottle shops. But there’s nothing quite like the tropical fruit aroma of the IPA poured straight from the pub’s unique flux capacitor system, which custom-adjusts carbon dioxide and nitrogen levels to ensure every pint is perfect.
How to drink: Bottles, growlers, and on tap.