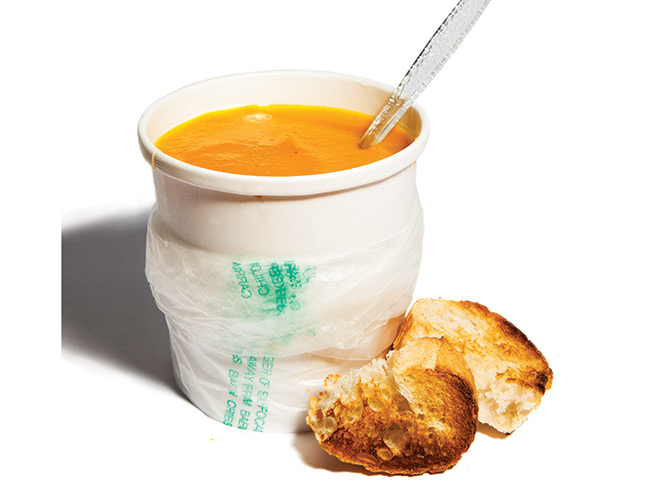 It may not possess magical powers to prevent you from catching a cold, but soup has comforting properties that shouldn’t be underestimated. Here are the best places to pick up a pint when you feel the sniffles coming on. Your couch, comforter, and Netflix queue await.

Just like Grandma’s
Bubbes around the world have made chicken soup the ultimate liquid get-well card. Serving up a buttery broth, generous chunks of meat, and rice that’s neither mushy nor too firm, Billy’s Deli & Cafe has got chicken and rice down to a science. For matzo ball fanatics, the ones at Langer’s are fluffy perfection in a clear broth. At Greenblatt’s the pillowy orbs are almost as soft and float among carrots, celery, and onions. Connoisseurs are sold on the steamed chicken consommé at Din Tai Fung , a San Gabriel Valley chain that keeps expanding. » Billy’s Deli & Cafe: 216 N. Orange St., Glendale; also at 5160 W. 190th St., Torrance. Langer’s: 704 S. Alvarado St., Westlake. Greenblatt’s: 8017 W. Sunset Blvd., West Hollywood. Din Tai Fung: 1108 S. Baldwin Ave., Arcadia; also at 177 Caruso Ave., Glendale, and 1088 S. Baldwin Ave., Arcadia.

A Taste of Persia
Though best known for what it does between two slices of bread, Attari Sandwich Shop makes a traditional Iranian osh that’s soothing and substantial. The thick and hearty soup—more like a stew, really—of lentils, barley, and black-eyed peas is tinged with lemon and sumac, drizzled with yogurt, and garnished with browned onions. It doesn’t get more comforting than this. » 1388 Westwood Blvd., Westwood, 310-441-5488.

Tokyo Story
Many of the best ramen houses in L.A. won’t offer their signature dish in take-out form (leftovers don’t count). Fortunately Jinya Ramen Bar does. One container is filled with springy noodles and toppings that include fatty pork chashu, green onions, and hard-boiled egg; the other has hot liquid to pour over them. For the purest distillation of flavor, stick to the basics: either the remarkably deep chicken broth or the rich tonkotsu (pork). And don’t wait too long to consume the mixture. » 5168 Wilshire Blvd., Mid City; also at 11239 Ventura Blvd., Studio City.

Bangkok Bound
When you want something that satisfies your palate while clearing your sinuses, try the tom yum soup at Jitlada. Shrimp and wedges of tomato bob in the hot and sour concoction; the tartness comes from lemongrass and the heat from three kinds of chilies. The unassuming Sanamluang Café stays open until 3:30 a.m., and most of the noodle dishes can be served dry or in a bowl of soup loaded with beef tendon, fish balls, fried wontons, and other ingredients. Not feeling adventurous? Get the General’s Noodles: a meaty stock laden with shrimp, barbecued pork slices, roasted duck, and ground pork. » Jitlada: 5233½ W. Sunset Blvd., East Hollywood. Sanamluang Café: 5176 Hollywood Blvd., East Hollywood, 323-660-8006.

From the Field
Whether it’s a butternut squash reduction or a creamy blend of zucchini and Jack cheese, nobody can turn the bounty of the garden into a meal as Joan’s on Third can. The upscale café and market, which will soon be opening a branch in Studio City, lists a daily selection of soups on its Web site, and it always features at least one vegetarian option. It doesn’t hurt that Joan McNamara makes a killer grilled cheese sandwich to go with that basil-tinged, slightly spicy tomato soup. » 8350 W. 3rd St., Beverly Grove.