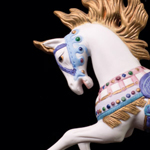 Soon after the first patent for an electric carousel was issued in 1871, every pleasure pier, amusement park, and traveling carnival had a collection of intricately carved horses rising and falling on brass poles. Today a few originals live on in the L.A. area, and new creations push the theme into the 21st century. Grab a kid or hop in the saddle for a classic ride.

Local Tradition
Made by the Philadelphia Toboggan Company, the Santa Monica Pier Carousel has been twirling for more than 50 years. Owner Adriana Roth, a carousel carver, regularly swaps out the wooden horses to keep them looking sharp. The 1916 Looff Hippodrome that houses it is the complete experience, with a calliope, arcade amusements, and an old-time soda fountain. While the ride has appeared in scores of films and TV shows, its most important cameo has been in family scrapbooks. “Every parent,” says Roth, “has a picture of their kid on a carousel.” » 200 Santa Monica Pier, Santa Monica, 310-394-8042.

Gold Country
The merry-go-round at the Montebello Barnyard Zoo is fairly modest, but the surroundings make the trip worthwhile. A smidgen of a ghost town is home to the carousel, a locomotive, and a gold-panning attraction that evoke the Wild West. It’s even better when barnyard animals eat out of your hand and the sound of a distant ice cream truck beckons. » 600 Rea Dr., Montebello, 213-718-5442.

Vintage Beauty
Children race over rolling hills toward the striped dome as a Stinson band organ bellows. This tableau—accented by the ancient horses—could just as easily have taken place 75 years ago, when the Griffith Park Merry-Go-Round arrived on the scene. Creaky and crackling, it’s a time machine, an art lesson, and a thrill ride all in one. » 4730 Crystal Springs Dr., Griffith Park, 323-665-3051.

Creature Feature
How often does your kid get to sit in a dung beetle chariot? The Tom Mankiewicz Conservation Carousel at the Los Angeles Zoo offers such oversize critters as a praying mantis, a tapir, and a poison dart frog. The amusement was donated by A&M record mogul Jerry Moss and his wife, so everyone can listen to Herb Alpert, the Go-Go’s, and other non-calliope artists. » 5333 Zoo Dr., Griffith Park, 323-644-4200.

Animal Kingdoms
One of the most heavily trafficked merry-go-rounds in the state, Disneyland’s King Arthur Carrousel is sparkling perfection. Walt himself rescued the team of white dressage horses from a freeway construction project before letting them gallop through Fantasyland’s medieval village. While you’re in Orange County, visit the pleasantly tattered hodgepodge at Knott’s Berry Farm. Master woodworker Gustav Dentzel carved the roosters, rabbits, and other beasts that race beneath painted scenes of California history. From the horsehair tails to the dusty gears overhead, the patina of a hundred summers lingers. » Disneyland: 1313 S. Harbor Blvd., Anaheim, 714-781-7290. Knott’s Berry Farm: 8039 Beach Blvd., Buena Park, 714-220-5200.

Fiberglass Menageries
The two-story creations inside the Westfield Santa Anita and Westfield Topanga malls are the fast food of carousels: convenient and open all the time. They also offer a punch card that earns you a free ride after five trips. With their cartoonish detailing, the fiberglass animals will make purists scoff, but your three-year-old won’t argue the finer points of marsupial anatomy amid the swag and twinkling lights. » Westfield Santa Anita Mall: 400 S. Baldwin Ave., Arcadia, 626-445-6255. Westfield Topanga Mall: 6600 Topanga Canyon Blvd., Canoga Park, 818-594-8740.