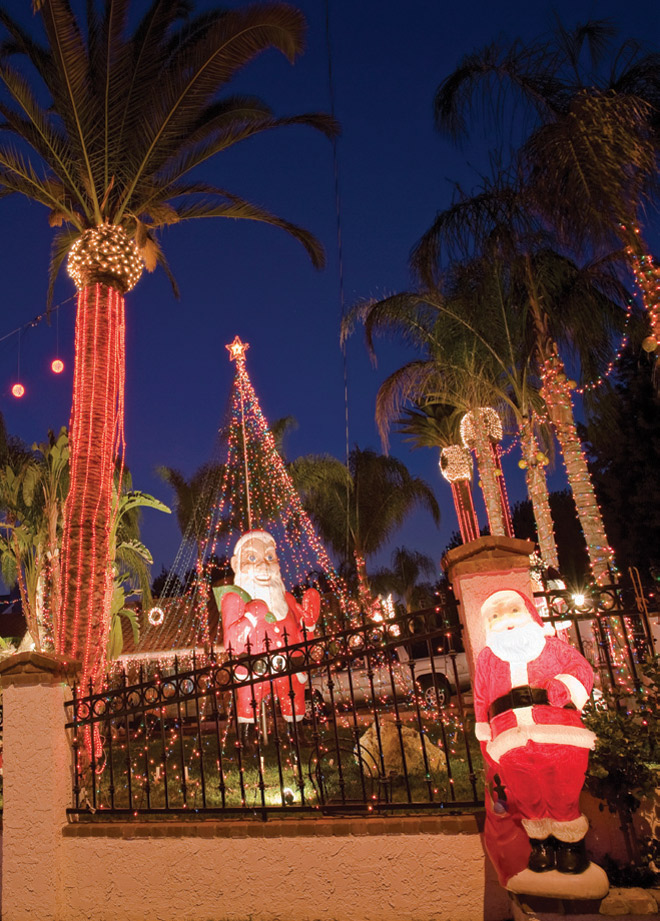 The tradition of decorating a tree at Christmas started more than 500 years ago, but only recently did LED technology catch up with the urge to smother your entire house with lights synchronized to “Grandma Got Run Over by a Reindeer.” Seasonal yard art thrives in Los Angeles, where mega displays can elevate a low-key custom to epic proportions. Forget simple and serene; these people know how to put on a show.

Let There Be Light
Louis Armstrong was captivating audiences with his version of “White Christmas” when the residents of Candy Cane Lane in Woodland Hills first flicked on the colored lights. Santa Claus himself has been known to frequent the one-square-mile swath of ranch homes to pose for photos and cavort with elves. There are vendors in the street and kids playing live music. Park your car and walk; you wouldn’t want traffic to dampen the Christmas spirit. » North of the 101 freeway between Oxnard St. and Lubao and Winnetka Aves., Woodland Hills.

Shine On
The panoramas at the Upper Hastings Ranch Holiday Light Up in Pasadena don’t just simulate movement; some of the houses in this 45-square-block midcentury neighborhood are equipped with full-on animatronics. One award-winning home featured a snow cannon that created a blizzard. While you’re in the area, be sure to check out Christmas Tree Lane in Altadena. The towering cedars along Santa Rosa Avenue have been strung with lights since 1920, the oldest such spectacle in Southern California. » Upper Hastings Ranch: West of Michillinda Ave. and north of Sierra Madre Blvd., Pasadena. Christmas Tree Lane: Santa Rosa Ave. between Woodbury Rd. and Altadena Dr.

Busman’s Holiday
Pull out the wool scarves and hats for a waterfront tour through Long Beach on the Big Red Bus. Dressed in his Saint Nick best, owner Peter Joseph leads open-air excursions atop a double-decker bus. The rumbling behemoth visits decorated houses along the canals and Los Alamitos Bay, where even the buoys are adorned with lights. The upper berth gives a glimpse of second-story living rooms filled with trees and presents. A singing elf and complimentary cocoa and cookies complete the night. » $10 per person; tours depart from SeaPort Marina Hotel, 6400 E. Pacific Coast Hwy., Long Beach.

All Aglow
Instead of walking or driving, relax and let the holiday cheer sail by. This year marks the 50th competitive Marina del Rey Boat Parade, which showcases fireworks, celebrity hosts, and hundreds of decorated yachts glittering on the water. Several restaurants along the shore offer views of boats that are as animated as the floats in Disneyland’s Main Street Electrical Parade. » View from Burton W. Chace Park, 13650 Mindanao Way, Marina del Rey.

Tunnel Vision
Despite the nickname, there isn’t a headless horseman in sight in the Torrance neighborhood known as Sleepy Hollow. With its lighted branches and trunks that transform the dense canopy of trees into a luminous tunnel, it’s easy to see why traffic backs up to Pacific Coast Highway. Dodging cars, brave pedestrians munch popcorn sold by local kids while ogling miniature LED carnival rides on one side of the street and gingerbread surfers on the other. » Between Pacific Coast Hwy., Calle Mayor, Anza Ave., and Sepulveda Blvd., Torrance.

Making History
The spiral staircase, flying buttresses, and Mediterranean domes of the Mission Inn have enchanted presidents and dignitaries for more than a century. At Christmastime the fanciful Riverside hotel is festooned with 3.6 million lights and more than 400 animatronic figures. The Festival of Lights, now in its 20th year, includes Dickensian carolers, an ice rink, and horse-drawn carriage tours that lead guests through grounds sprinkled with manufactured snow. » 3649 Mission Inn Ave., Riverside.