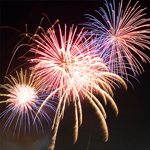 If a soaring rendition of “The Star-Spangled Banner” synchronized to bursts of colored embers streaking across the night sky doesn’t spark your patriotic fire, we’re not sure what will. In Los Angeles you can get your “Yankee Doodle” on in the Valley, in the hills, or at the beach.

Beer and Burgers
The Rose Bowl, which has dubbed itself “America’s Stadium,” honors the birth of our nation with the all-day extravaganza Americafest 2012. It starts at 2 p.m. and offers food, crafts, games, an inflatable slide, and a bouncy house for kids. Inside the stadium ceremonies and performances begin at 7:15, followed almost two hours later by a 30-minute pyrotechnic ballet. » 1001 Rose Bowl Dr., Pasadena. Admission, $13; free for kids under 7.

Skydivers and Bands
The 64th Annual Pacific Palisades Fourth of July Parade, featuring “the Beav” (Leave It to Beaver star Jerry Mathers) as this year’s grand marshal, kicks off with a skydiving demo at 1:50 p.m. before marching along Sunset Boulevard. Crowds then head to Palisades Rocks the Fourth at Palisades Charter High School’s Stadium by the Sea for a two-hour, family-friendly set by the English Beat (“Mirror in the Bathroom”—it’s a classic) before the event’s explosive finale. » Palisades Charter High School, 15777 Bowdoin St., Pacific Palisades. Parade: free; Palisades Rocks the Fourth: $5; free for kids under 12.

Baseball and Hot Dogs
While fireworks are par for the course at Dodger Stadium, what’s more patriotic than baseball on the Fourth? Even the teams battling it out on the diamond sport the colors of Old Glory. If you don’t care about the game, prepare a picnic, hike to Elysian Park, and watch the show from your perch in the hills. (Parking anywhere nearby is a nightmare, so pack light.) » 1000 Elysian Park Ave., L.A.. Dodger Stadium: $10-$160.

Spokes and Sparklers
After being eliminated last year due to budget cuts, Fourth of July fireworks in the Marina have returned. Hopefully so has the long-running tradition of riding a bicycle from Venice to Burton W. Chace Park. In the past the stretch that runs parallel to the boardwalk filled with cyclists of all ages, their fingers crossed in the hope that the marine layer would lift by 9 p.m., when the fiery display was mirrored in the harbor. » Views in Marina del Rey at Burton W. Chace Park, 13650 Mindanao Way; Fisherman’s Village, 13755 Fiji Way; Marina (Mother’s) Beach, 4101 Admiralty Way. Free.

Starboard and Stripes
For a celebration with grandeur, board onetime troopship and former luxury liner the Queen Mary. Along with the “Red, White & Blues” spectacle, there’s dinner, a tour, and family entertainment. If the auditory assault hasn’t made you too jumpy to sleep, book a stateroom and stay the night in the (allegedly) haunted floating hotel. » 1126 Queens Hwy., Long Beach. Room rates, $97-$399.

Barry and the Bowl
He writes the songs that make the whole world sing, and on the Fourth at the Hollywood Bowl, Barry Manilow performs many of them as well as traditional patriotic numbers. He’ll be accompanied by the L.A. Philharmonic and a surprise “special guest.” The concert starts at 7:30, and the rockets’ red glare lights up the Bowl after sundown. » 2301 N. Highland Ave., Hollywood. Admission, $15-$220.

Mickey and Friends
This year Disneyland hosts a symphony of explosions for four consecutive nights (July 1 through 4) as part of “Disney’s Celebrate America! A Fourth of July Concert in the Sky.” The recently renovated Disney California Adventure joins the action with a new Independence Day preshow for World of Color that includes video projections, light and water effects, and more nighttime sparkle. » 1313 S. Disneyland Dr., Anaheim. Admission, $87; $81 (ages 3 to 9).

Looking for other ways to celebrate America’s 236th birthday? Here are six more events that will brighten your bash:

VIPs and Magic Castles
Where: CBS Studio Center, 4024 Radford Ave., Studio City
When: July 4
What: The Studio City Chamber of Commerce, CBS, and Olive Crest are uniting to put on an activity-packed celebration, which will include a children’s fun-zone, a Magic Castle-themed show, a model airplane exhibit, acts staged throughout the lot, and a VIP package with extra, to-be-determined goodies. More information.

Starlight and Soul
Where: Starlight Bowl, 1249 Lockheed View Dr., Burbank
When: July 4
What: A C-17 flyover, a Presentation of Colors, the National Anthem, performances by the Red Chair School of Performing Arts, and a set by STONE SOUL and the Burbank Philharmonic Orchestra will color this bowl red, white, and blue. More information.

Lagoon and Boom
Where: Castaic Lake Lower Lagoon, 32132 Castaic Lake Dr., Castaic
When: July 4
What: Head to the lake for food, swimming, jumpers, music, and a picnic. The park will be open all day for the Fourth. More information.

Intergalactic You and Me
Where: Home Depot Center, 18400 S. Avalon Blvd., Carson
When: July 4
What: Win or lose, the Los Angeles Galaxy will partake in a Fourth of July celebration after they play the Philadelphia Union. More information.

PLUS: See these and 46 MORE fireworks shows on our interactive map  of Independence Day events:

With additional reporting by Sean Fitz-Gerald