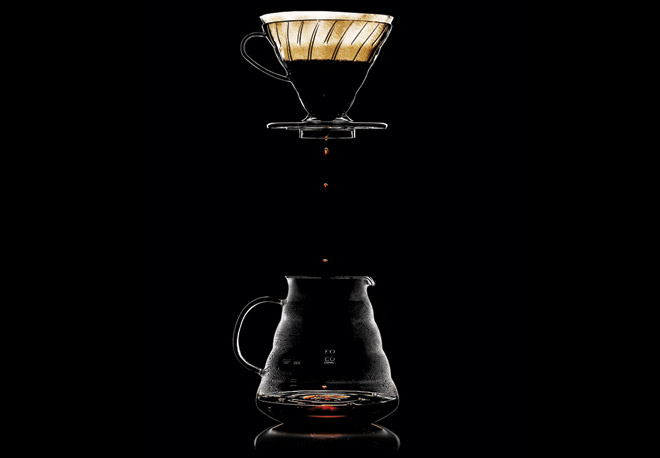 Led by a zealous crew of precision brewers, the latest trend in caffeine extraction has been dubbed  “third wave” coffee (the first wave presumably being all those decades we spent drinking Folgers and the second being the era of Peet’s and Starbucks). Chicago’s Intelligentsia sparked the local boom in 2007, when it brought its high-end, single-origin ethos to L.A. Today there are dozens of new contenders that offer meticulously sourced, lightly roasted beans and cups brewed to order.

TAKE IT BLACK
Founded by a trio of former Intelligentsia employees, Handsome Coffee Roasters exudes a puritan rigor. The layout of the 3,500-square-foot flagship in downtown’s arts district allows patrons to watch beans swirl inside a vintage 1956 Probat roaster as their now de rigueur brewed coffee is prepared by hand. While the minimalist café can have a chilly vibe, the beans—labeled “C” for comfort or “A” for more adventurous flavors—can’t be faulted. Fresh competition recently arrived in the form of Portland’s Stumptown, which opened its first L.A. location in the neighborhood. » Handsome: 582 Mateo St., downtown, 213-621-4194; Stumptown: 806 S. Santa Fe Ave., downtown.

COLD AS ICE
The triangular, two-story Caffe Vita is full of laptop jockeys sipping single-origin beans that were roasted at the company’s Seattle headquarters. The baristas are friendly, and they’re almost as proud of the shop’s vintage hi-fi sound system as they are of its coffee. Try the fruits of their granita machine: a bittersweet combination of slushy ice, caffeine, and whipped cream. » 4459 W. Sunset Blvd., Silver Lake, 323-663-6340.

ROOM FOR MILK
Though Iota Brew Café—with its wine bar, coffee and tea “labs,” and curious snacks (beef and mango quesadilla, for one)—garners a lot of attention, fans of the bean should head to nearby Brew/Well for nuanced drip coffees and espressos perfumed with lavender syrup or topped with honeyed foam. Formerly known as Drip, it resides in a Koreatown strip mall. With its lack of pretense and speedy Wi-Fi, the shop boasts the best of both worlds: meticulously made joe and an inviting atmosphere. » Iota: 528 S. Western Ave., Koreatown, 213-568-3700; Brew/Well: 3525 W. 8th St., Ste. 101, Koreatown, 213-384-0884.

CAUTION: HOT
Kyle Glanville and Charles Babinski, the team behind the recently opened Go Get Em Tiger and G&B Coffee, were both Intelligentsia honchos before splitting off. If both outfits feel more like wine bars than coffee shops, that’s by careful design. The pair use an automated Fetco brewer and are fairly agnostic about beans, buying from Intelligentsia and San Francisco bigwig Ritual Coffee, among others. Their cold-brew coffee, known for its smoothness and low acidity, is among the chillest in town. » Go Get Em Tiger: 230 N. Larchmont Blvd., Larchmont Village, 323-380-5359; G&B: Grand Central Market, 324 S. Hill St., Ste. C19, downtown.

CALL OF THE WILD
Sustainably grown fair-trade beans from Central America are the focus at Cafecito Organico, a farmers’ market staple that now has several brick-and-mortar locations. At the Silver Lake store, while away the morning on the ramshackle patio with a cup of brightly flavored Salvadoran coffee. Named after the café, the signature drink is an industrial-strength wonder: a ristretto (twice the grounds, half the water) made with Espresso Clandestino, raw sugarcane juice, and a cap of foamed milk. » 534 N. Hoover St., Silver Lake, 213-537-8367.