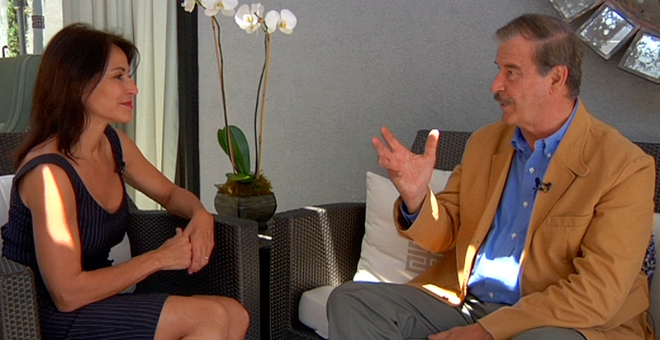 In the third episode of “Big Shots With Giselle Fernandez,” our short video series featuring business leaders and cultural influencers from around the Globe, Fernandez sits down with Vicente Fox, the former President of Mexico. Best known for becoming the first opposition party candidate to be elected head of the Mexican government in more than 70 years back in 2000, Fox is currently on the board of directors of A Better LA, the nonprofit founded by NFL coach Pete Carroll to improve life for impoverished Angelenos. Why is he spending most of his time fund-raising here in Los Angeles? He tells Fernandez it is to empower Latinos on both sides of the border.

Here are a few other highlights from their conversation:

Fox also shared this video message in Spanish for those who have come to Los Angeles from Mexico in search of a better life:

Translation: Thank you for this opportunity my beloved countrymen, my heirs, my examples for living. You are in a very special category of people. You work hard, do quality work, you are honest to this nation that has received you to work. Above all you have aspirations and goals to better your life and to provide your children with a better quality of life. You give them a real opportunity to go to university. For this reason I admire you and tell you “Centro Fox” is on your side. We will open operations here in Los Angeles to bring programs we provide in Mexico for you, your family, your kids. I send you greetings, lots of love, and a big hug.