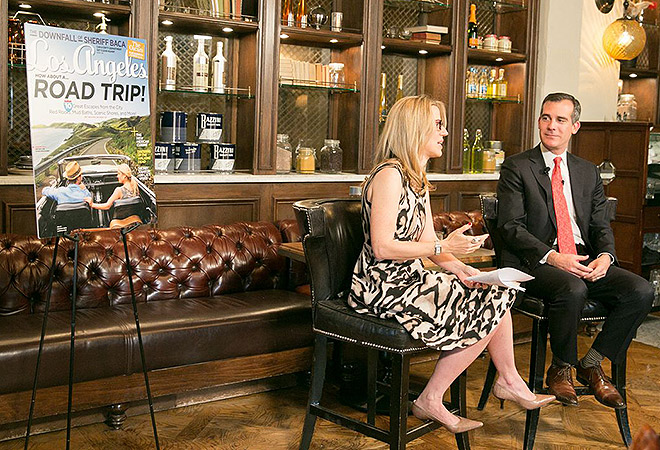 Interested in some one-on-one time with Mayor Eric Garcetti? You’re not alone. From Maureen Dowd’s recent New York Times column comparing his mayoralty to that of New York’s Bill De Blasio to a Time magazine profile last week, inky assessments are flowing halfway into Garcetti’s first year on the job. If you’re hoping to better understand the mayor’s big picture for the city, we have something special for you this week at LAmag.com.

Recently I spent an hour interviewing the mayor for Los Angeles magazine’s latest Breakfast Conversation, a series in which we invite movers and shakers in L.A. to candidly talk about the city and their role in it. Held at the Public restaurant in the historic Hollywood Roosevelt Hotel, this conversation was the first one we’ve filmed as part of our Big Shots video series. The mayor was critical and self-deprecating, funny and thoughtful. He even threw down a swear word, which almost knocked me off my barstool. We cover subjects that ranged from public education to public transit, poverty to the drought. We kick it off today with a question I asked Mayor Garcetti that is at the forefront of all our minds (and at the bottom of our feet) these last two weeks. L.A. is shaking a lot—are we remotely prepared for the big one? What he has to say will surprise you. Come back to the CityThink blog tomorrow for more insights about where L.A. is at—and where it’s going—from the fellow who should know best.

On the 4.4 magnitude St Patrick’s Day “Shamrock Shake” earthquake and L.A.’s disaster preparedness:
“[After the quake,] I got on the phone immediately with Dr. Lucy Jones. The United States Geological Survey has loaned her to Los Angeles for a year…I’ve tasked her with coming up with a plan to strengthen our buildings, our communication and infrastructure, the water supply…Someone asked me, ‘Are we prepared for an earthquake?’ And I said, ‘We’re as prepared for an earthquake as any big city in America [is] for a disaster,’ which is to say we’re wholly unprepared…remember, we live a digital life, and you’re going to have an analog day when a big earthquake hits.”

On the issues that keep him up at night:
“When I leave town…I think, ‘Is this when something bad is going to happen?’ When I went to Washington DC my second month in, that’s when the Trayvon Martin trial had its verdict, and suddenly people were on the 10 freeway, and I was two hours, three hours from the nearest airport…I had to catch a plane with a minute to spare to come back here knowing that…probably nothing would happen, but if I didn’t come back, the city could explode. That’s part of the tension you have as mayor.”