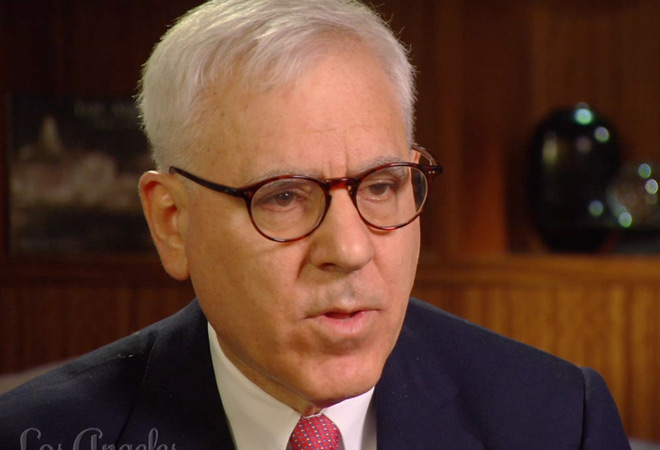 In the second episode of “Big Shots With Giselle Fernandez,” Los Angeles magazine’s short video series featuring industry leaders and cultural influencers, Giselle Fernandez sits down with David Rubenstein, a “private equity guru” and co-founder of the Washington D.C.-based Carlyle Group investment firm. In a discussion about global economics—”We are not where we should be”—investing, and philanthropy, Rubenstein opens up about what he describes as “The Energy Revolution,” the patriotic inspiration behind his charitable giving, and why he won’t hang his hat up until he’s 85. Watch the episode, then read our Q&A with Fernandez below:

Behind the Big Shots Interview With David Rubenstein: A Q&A With Giselle Fernandez

You and David have a really nice rapport. When and how did you first meet?
I have a tremendous amount of respect for David Rubenstein. Among his many roles, he is the chairman of the Kennedy Center for Performing Arts, where I am a trustee and member of the executive committee. We have come to know each other on the board and working closely on the honors review process this past year to bring more diversity and inclusiveness to the honors process. I not only have grown to respect his tremendous leadership but also his immense generosity and patriotism. I have been very inspired by him and our rapport reflects that admiration.

You ask David about investing in California and, more specifically, the Hollywood film industry. Did he give you a sense of his feelings about Los Angeles as a city?
He made it very clear he has great regard for California, where he has Carlyle offices and significant investments and interests. He talked of his purchase of Trust Company of the West, brought to him by fellow trustee Marc Stern, as one of Carlyle’s best investments ever. With a smile, he declined to reveal other interests here, as he didn’t want to tip off eager competitors. Despite talking with George Lucas about the building of his museum at the Presidio, David said he’s not too interested in investing in the entertainment business. As for Los Angeles, his daughter lives here, so he has a sweet spot for our city for sure.

Your discussion was wide ranging. Which insight that David shared has stayed with you most since your interview?
There are two things that impressed me most. First, for all his success, David is perhaps one of the most down to earth men I’ve ever met. He speaks of his humble roots and has a reverence for America that inspires him to give back. I find the patriotism that fuels his philanthropy astounding. Second, it’s quite impressive to have someone of his caliber call fixing the wealth gap in our country an imperative for our overall economic stability. He gets that until we empower the working and middle classes, we are undermining our future.

On the next episode of Big Shots former president of Mexico Vicente Fox talks about the work he’s doing in Los Angeles and the business opportunities that exists across the U.S./Mexico border.