A NOTE FROM EDITOR-IN-CHIEF MAER ROSHAN

It’s been 31 years since this magazine published its first Best of L.A. issue—our annual compendium of the finest food, shopping, entertainment, and services on offer in this remarkable city. Produced by a sprawling team of critics and reporters, it’s since gone on to become one of our most popular issues. This year, amidst pandemics and protests, we briefly considered skipping this issue, but decided against it. Even in the worst of times, life goes on—Angelenos are still hungry for things to buy, eat, see, and do. But the establishments featured in this year’s issue reflect the grim new realities of the city’s daily life, so you’ll find fewer fine dining restaurants, bars, and museums, and more outdoor and online activities and places to grab tasty takeout. All were selected with the mission of making our proverbial new (and hopefully temporary) normal as enjoyable as possible.

We’ve devoted our feature pages in this issue to two stunning photo portfolios—one a tribute to the city’s past, the other a salute to its future. Independent businesses have always been the soul of this city. But already buffeted by the internet and economic turmoil, they are now being mercilessly impacted by current events. Even beloved landmarks like Du-Par’s and Hollywood Toys & Costumes are barely holding on. A Los Angeles stripped of such singular places will be a less interesting, much-diminished city. So we sent out photographer Eric Axene to record some of the local institutions that are being heroically kept alive by their passionate owners and patrons. 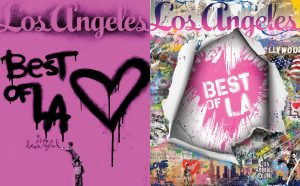 But amidst despair there are signs of hope. Last June, photographer Sam Comen turned his lens on L.A.’s Class of 2020 to capture an intimate look at the lives of dozens of high school seniors across the city as they graduated into the teeth of a pandemic and a cratering economy. They were disappointed about missing the pomp and circumstance that usually accompany this milestone, but they are also resilient and thoughtful. The kids, as they say, are alright.

Meanwhile, we’ve decided to do something special with this month’s cover—or covers, as it turns out. For over a decade, Thierry Guetta, who works under the moniker Mr. Brainwash, has been one of L.A.’s most celebrated street artists, pushing the envelope with exuberant, riotously colorful murals that celebrate L.A.’s diversity and decadence. So he seemed like the ideal person to capture the city’s fractured mood. We were so enamored with his sketches, that we decided to run two of them. That’s why you’ll see a pair of covers on newsstands around town: one a stripped-down, punked-out paean to spray-painted street art; the other a maximalist collage that captures all of L.A.’s furious energy and the beating heart of this city that refuses to quit. Guetta is painting a huge mural replicating one of these covers on the wall at 1255 South La Brea Avenue where he usually showcases his work. We invite you, however masked and socially distanced, to come pay it a visit when the mural is complete at the end of July. It will be up through August.