Home L.A. History The Insider’s Guide to The Rose Parade 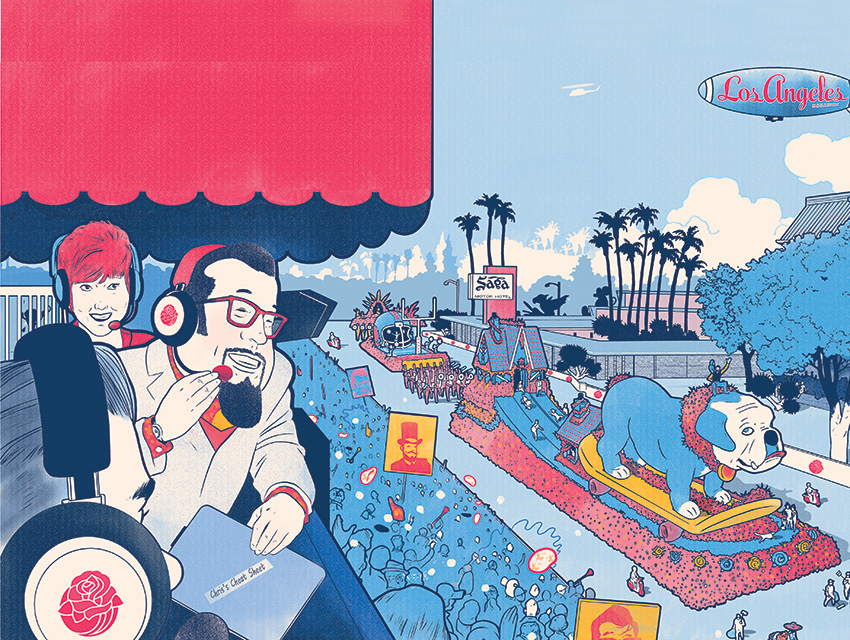 A. Flying Colors
East L.A. native Raul Rodriguez has designed more than 500 floats during the past 30 years. He’s the guy with the hyacinth macaw (named Sebastian) on his shoulder.

B. Moving Party
Floral dragons, dinosaurs, and even a giant robot in a top hat have rolled down Colorado Boulevard. Last year’s 119-foot-7-inch float with a skateboarding bulldog holds the honor of being the nation’s longest.

C. These Buds for You
Volunteers rise early to finish festooning the floats with 18 million flowers from six continents. Equestrian brigades, vintage cars, and the Rose Queen herself are draped in roses.

D. Historic Roots
Master swordsman, Mayan explorer, and big-game fisherman Charles F. Holder founded the parade in 1890, imploring his friends at Pasadena’s Valley Hunt Club to “hold a festival to tell the world about our paradise.”

E. Walk to the Hand
The royal court waves throughout the three-hour parade. Some signature gestures include “the windshield wiper,” “the tiara checker,” “the lightbulb,” and “the Queen Mum.”

F. Rooms with a View
Want a window seat? Stay at one of six motels on Route 66: Vagabond, HoJo, Pasadena Motor Inn, Ramada, Travelodge, or my favorite, the midcentury Saga Motor Hotel. Book now to reserve for 2014.

H. Splashy Entrance
Out of 123 parades, only 10 have been hit with rain. Don’t fret if it looks cloudy; the floats must go on. When a storm soaked the procession in 2006, participants kept marching with clear plastic umbrellas.

J. Thorny Commentary
Best tweet yet about hosts Stephanie Edwards and Bob Eubanks: “it’s only a matter of time b4 stephanie edwards & #bobeubanks either exchange gun fire or start making out w/tongue #roseparade.”

Regal Beagle: Daniel the “Miracle Dog” to Star in This Year’s Rose Parade