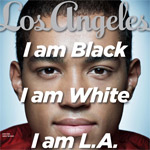 Ours is a city of many voices and cultures, of disparate backgrounds and conflicting interests. Twenty years ago this month, those fault lines ruptured. Whether you call it an uprising, a riot, or civil unrest, what happened on April 29, 1992, changed Los Angeles and the people in it, prompting Rodney King to famously ask, “Can we all get along?” We still want the answer to be yes. But it’s complicated. Even photographers were targets during the 1992 melee. How one captured the chaos in black and white Timeline: How the Riots Happened

From the Chinese Massacre of 1871 to recent unrest on high school campuses, some moments in the city’s past are among it’s most troubles hours Exclusive photos of the Los Angeles riots by Ted Soqui The Sound of the L.A. Riots Editor-in-chief Mary Melton and the staff of Los Angeles magazine remember the L.A. riots
20 Years After
Portraits of seven people who were changed forever by the riots. As told to Dave Gardetta PLUS:
Community leaders from across L.A. tell us how the spring of 1992 shapes their vision of our city today

A roundup of events commemorating the L.A. riots

Two images define the 1992 riots, but the circumstances behind the chaos were far more complex Hair is the great equalizer, as Erika Hayasaki discovers when she visits L.A.’s headquaters of weave To Hush or to Hector? Intermarriage is on the rise, but that doesn’t mean it’s always easy. Matthew Segal on building a better union A British Indian living in L.A., Sanjiv Bhattacharya moves to a new neighborhood and finds diversity isn’t what it’s cracked up to be A bilingual L.A. native, Ruben Martinez became a spokesman for being brown in 1992. It got old fast The daughter of Korean immigrants who make a mean Philly cheesesteak, comedian Kat Ahn laughs in the face of stereotypes While shooting his latest film, Mario Van Peebles got schooled in diversity The LAPD has changed in its ethnic makeup as well as its attitude. Natasha Vargas-Cooper rides along Imagine Pittsburgh moving into L.A.—that’s how much our city’s population has swelled in two decades A chef, a DJ, and two gym rats prove how following your passions can bridge any divide. Profiles by Amy Wallace Six Angelenos born in 1992 reveal how much and how little their mixed ethnicities define them. As told to Ann Herold 5 Global Dishes Every Angeleno Should Know

Five essential ethnic dishes represent L.A.’s racial diversity while making for one heck of a tasty lunch. Here’s where to get them
Read more coverage of the L.A. riots from the archives of Los Angeles magazine

[May 1997]
Happy Fifth Anniversary!
How could anything good have come out of the ’92 riots?

[May 2002]
Smoke & Mirrors
Ten years later, what do we see when we remember the riots?