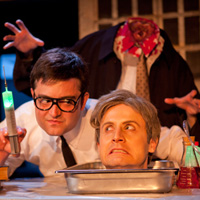 The Steve Allen Theater just announced that their screamsational production of Re-Animator – The Musical has been extended through June 26th. Stage blood manufacturers rejoice! I recently joined a packed house of horror fans, musical theater types (was that Neil Patrick Harris behind me?) and midnight movie junkies at what’s quickly becoming a cult stage production of a cult horror film. At the performance I attended, an entire row of patrons came dressed in medical scrubs and carrying hand props. The production is based on the 1985 movie starring Jeffrey Combs (who is currently portraying Edgar Allen Poe in another play at the same venue) about a deranged medical student who has discovered a way to bring the dead back to life. In this production, Graham Skipper (pictured on left) takes on the role of Dr. Herbert West, blithely dispensing life and death and then life again. His experiments begin with small animals but lead to an entire singing, dancing morgue. Jesse Merlin steals the show as the lecherous Dr. Carl Hill, a bewigged lothario with a penchant for stolen serums and restrained blonds. His extraordinary baritone reaches all the way to the back rows and adds to this immersive effect. An entire section of the theater is offered plastic ponchos to repel the gallons and gallons of blood merrily spurting from various zombies and body parts that litter the stage. All of these effects were created by the original artists from the film who were called back to translate the celluloid monsters to the stage and yes, every little paper cut spurts and spurts and the cast delights in sharing their hemorrhaging with the audience. Finally, a show that fulfills the promise of 3-D! The extended run now includes performances by The Tulsa Skull Swingers, an all-skeleton band, and another free flowing liquid, complimentary beer at the midnight show.