Home Uncategorized You Don’t Look A Day Over 99, Avalon! 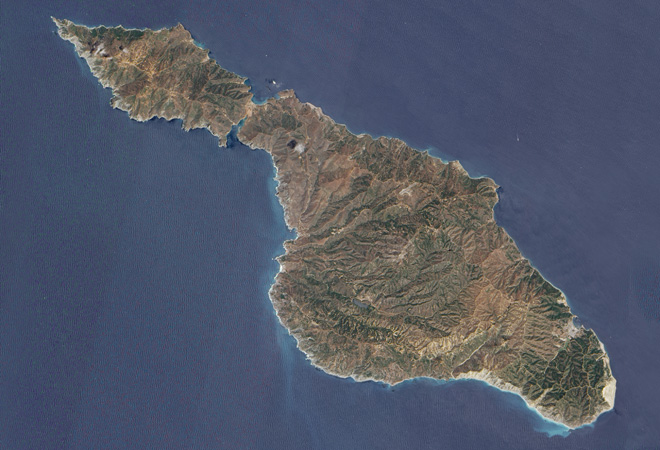 40 Cents:
Between 1919 and 1928, amateur archeologist Ralph Glidden dug into the earth in search of Indian artifacts for his homemade museum (admission 40 cents). His greatest discovery was a native cemetery, which he raided to decorate a macabre ossuary in his tourist attraction. Today, the bones reside at the UCLA Fowler Museum.

7 Shrubs:
There are rare plants, and then there are rare plants. When Catalina Island Mountain Mahogany (Cercocarpus traskiae) was first written about in 1897, 40 shrubs were documented. Today, only 7 individuals remain in their native habitat. The flower is extraordinarily rare member of the rose family.

557 Cars:
Avalon is the only city in California to regulate the number of cars within its borders. Most locals walk or drive golf carts to their homes, but local law permits a total of 557 automobiles. The current waiting list to add a new vehicle is 14 years.

26 Miles:
The first “multi-channel ultra-high frequency microwave system” or wireless telephone, was developed in secret during WWII and first used to make a mobile phone call between Catalina and San Pedro in 1946.

301 Feet:
The S.S. Catalina was called the “Great White Steamer” and carried more than 25 million passengers between 1924 and 1975. The 301- foot long ship became a floating disco in the 70’s, and spent the next two decades sinking into a Mexican harbor. After a multi-year effort to save the ship failed, she was cut up for scrap in 2009.

45 Seconds:
Catalina’s famous flying fish (Cypselurus californicus) can reach speeds of almost 40 mph, and when they break through the surface can spend 45 seconds flying above the water. They appear from May to September.

3 Months:
Sometime in early October of 1542, Spanish explorer Juan Cabrillo camped out on Catalina between visits to San Diego and Santa Monica. He broke his leg and died on January 3, 1543. He is thought to be buried on the island.

399 Dollars:
From 1927-1937 Catalina Clay Products manufactured beautiful vases, bowls, and pottery using the local clay soil. An original figurine of a man sleeping in a sombrero is currently listed on eBay with a starting bid of $399.