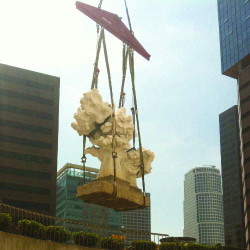 In 1965 Dutch sculptor Jacques Overhoff was commissioned to create a large concrete sculpture for a medical office on Wilshire Boulevard just west of Bixel Street. Soon after, the award-winning artist created the concrete relief on the Mark Taper Forum at the Music Center. Yesterday a crane arrived to cart away the 31-ton behemoth, titled The Universal Vertebrae, and move it into a nearby storage facility. The property is owned by Holland Partners, a Vancouver-based development company that has worked for over five years to develop the site. They recently broke ground for a seven-story apartment complex designed by Nadel Partners and are seeking a new home for the piece. They seem to like the art, though the poor thing has been misunderstood from day one. When it originally landed at the medical plaza the Los Angeles Times quoted onlookers who dubbed it “Slipped Disc” and “Sacroiliac’s Revenge.” When I drove by on Tuesday, a construction worker was dumbfounded when I pointed behind the fence. “You call dat art?”  Well, the piece has garnered some respect, at least from the folks seeking to replace it. Holland, who has been working with Overhoff and has already spent over $40,000 on relocation, is offering the artwork to any qualified 501 c 3 that comes forward to claim it. Hopefully it avoids the fate of the artists’ creation at Bayview Library in San Francisco. During demolition, workers attempted to remove the piece only to have it break up into small chunks. Here’s hoping our concrete skeleton doesn’t become a pile of bones.