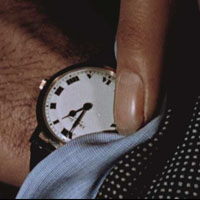 LACMA recently acquired a new video installation by artist Christian Marclay that depicts watches, clocks and the movement of time as seen in hundreds of movies and TV shows. The Clock will be screened in its 24-hour entirety starting next Monday morning at 11 and then shows in the Art of The Americas building until July 31st. The free screening at the Bing Theater is open to all, but the 600 seats are first-come, first-served. The Plaza Café will be open for late night munchies but you will have to resort to sobriety sometime after Stark’s bar closes at 2 a.m. The Clock clocks in at 1440 minutes, falling somewhere between Andy Warhol’s Empire and Anthony Scott’s The Longest Most Meaningless Movie In The World. The work was purchased with funds from Steve Tisch, whose longest movie, Forrest Gump, clocks in at 142 minutes.