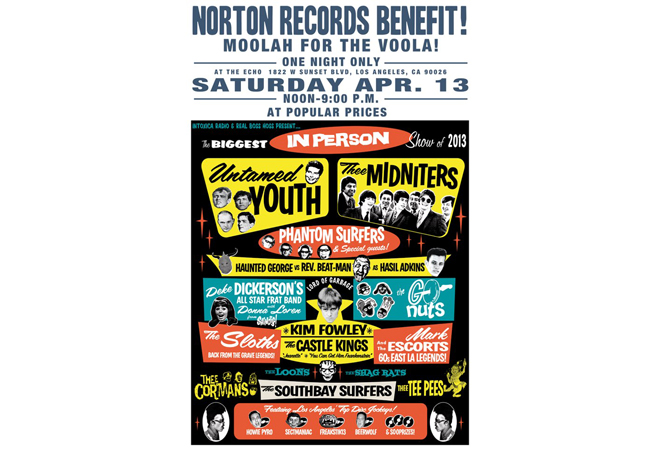 When Hurricane Sandy struck the east coast five months ago it destroyed thousands of rare records and reprints from Norton Records. The Brooklyn-based label is holding a benefit (their slogan is “You can’t drown the loud sound!”) next month at the Echo with some of the garage, surf, guitar, and East L.A. rock ‘n roll sounds from their label. The wildly eclectic bill includes Thee Midniters, the Phantom Surfers, and Deke Dickerson with Donna Loren, a special guest from the go-go era. Kicks Books, Norton’s publishing division, which re-released far out stuff like The Science Fiction Poetry Of Sun-Ra, was also destroyed and will be represented with a performance by L.A. music impresario Kim Fowley, whose biography Lord Of Garbage was released last month. This is the first time many of these bands have played together in years – it sounds like a wild show and its a big deal in music nerd world, so when you hear the flea market record hunters buzzing around the bins this month you’ll know what they’re talking about.