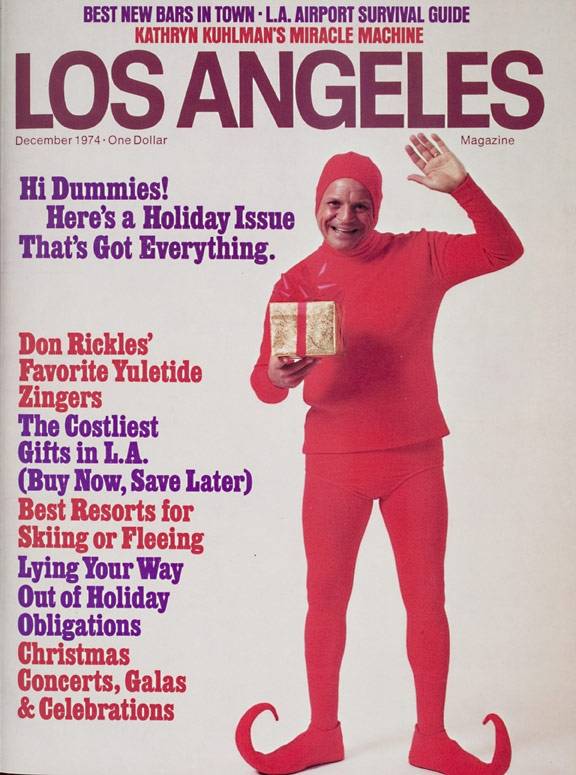 I finally got around to watching John Landis’s excellent documentary Mr. Warmth: The Don Rickles Project and loved it. I always knew he was a funny guy, but had no idea he got his start at the American Academy of Dramatic Arts alongside Grace Kelly, Anne Bancroft and Jason Robards. I didn’t know that he was on a Navy destroyer during World War II or that he’s traveled the world hamming it up with Bob Newhart. What a neat guy – and to think I was completely satisfied with just this clip. The Los Angeles magazine staff must have been elated to get him for the cover in 1974 at the height of his Johnny Carson hijinks. And in an elf suit, no less. I’m impressed. This issue had plenty of ferns, needlepoint and wicker and was railing against the “high cost of living” (A double scoop of Wil Wright’s ice cream had recently increased from .65 to .75 cents!) while touting luxuries like a $4685 suite at the Beverly Hills Hotel as the ideal holiday gift. There was a profile on faith healer Kathryn Kuhlman, snow getaways, a “scareport” guide to LAX (Complimentary cakes and free Alka Seltzer aboard Pan Am) a piece on the “Saloon Renaissance” showcasing new bars like the revamped Cole’s French Dip, Casey’s Irish Pub and the 94th Aero Squadron in Van Nuys. Hot that month was a rumor that Sam Yorty was negotiating to turn KROQ into a conservative talk station, how could we have lived without the “Roq of the 80s?” Reruns of The Partridge Family trumped the CBS Evening News (Watergate burnout?) and Mayor Tom Bradley appointed actor George Takei to the board of what is now the MTA. OK, back to Don Rickles, our elf and his zingers: “I love kids who look at you and say ‘Is that all I’m getting?” I tell them, ‘No, now Daddy’s going to wet your bed and tell Mommy you did it.”