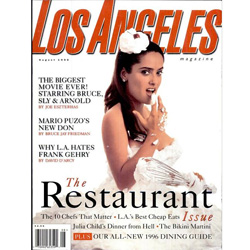 Share
Email
Facebook
Twitter
Pinterest
ReddIt
Vintage Cover of the Week – August, 1996
Reaching age fifteen is always difficult. Sure, it’s a hard time for a kid, but it’s almost impossible to survive as art, or fashion, or even a movie. After a decade and a half, almost nothing looks good, except maybe the August, 1996 issue of Los Angeles magazine. I can’t imagine the endless wrangling it would take in 2011 to get a big star like Salma Hayek into a dress made of whipped cream. Our tribute to Herb Alpert’s iconic 1965 album Whipped Cream and Other Delights  (we were obviously not the first to come up with this idea) spawned some choice quotes from the cover model. “I thought I was going to be naked, so I asked the photographer if I could wear a cake for a hat.” That photographer was Bonnie Schiffman, who created the homage for our annual restaurant issue, assembled by our then-food critic Jonathan Gold. One thing we probably wouldn’t repeat from that cover is the phrase “Bikini Martini” (Which, incidentally is vodka, raspberries and Cointreau) or claim that “L.A. Hates Frank Gehry” whose Walt Disney Concert Hall was taking forever to materialize. We were entranced by the novelty of Caller ID, which had just arrived in Los Angeles, the latest novel by Godfather author Mario Puzo and predicted David Letterman would be hitting our shores by “next summer,” just as soon as he figured out what to do with this kid Jon Stewart. There is an epic excerpt from Joe Eszterhas (haven’t heard that name in a long time) and An Alan Smithee Film, which is about Arnold Schwarzenegger, Sylvester Stallone and Bruce Willis, but stars Chuck D., Richard Jeni and Coolio.  We named ten ”Best New Restaurants (7 of which have since closed) and on page 82 we imagined octogenarian Julia Child submerged in a tin of Crisco. We asked Hayek if this was the first time she had been slathered in whipped cream. “No.” She said “But it’s the first time I got pictures.”