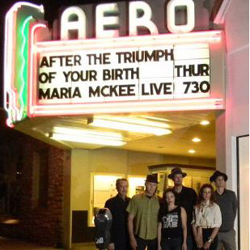 Pressing his friends and family into service and fashioning equipment from PVC pipe, a sliding glass door frame and an electric skateboard, filmmaker Jim Akin created After The Triumph Of Your Birth, a melancholy road trip movie for the 21st century. Akin wrote, produced, photographed, edited and performed music for the film. He probably made sandwiches for the actors in between takes. I caught a screening at the Aero Theater recently and left exhausted from the weeklong walk the movie follows from the Pearblossom Highway to Santa Monica. Akin describes the script for the “semi-autobiographical” film as a “dense poetic beatnik stream of consciousness” and I agree completely. Los Angeles plays a major character in the picture and I was grateful that the rhythm allowed rays of sunshine like Chicken Boy and Nick’s Café into this bleak world. The film was introduced by screenwriters Josh Olson (A History Of Violence) and Larry Karaszewski (Ed Wood) who praised Akin’s ability to produce a beautifully shot feature film for $550 and called it a “quintessential L.A. movie.” Judge for yourself. The film is available on DVD and streaming video this week.