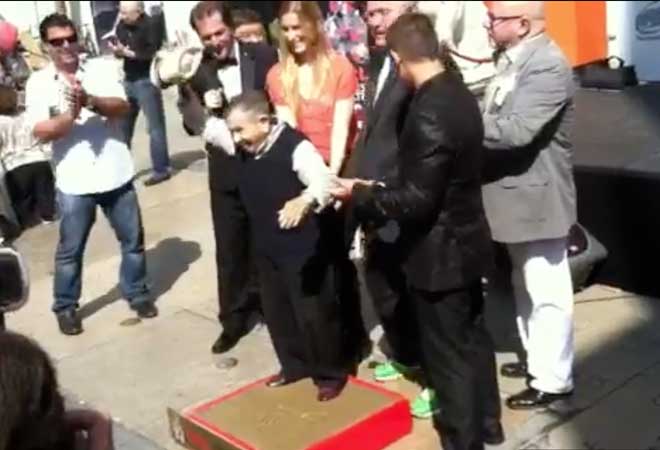 Wizard of Oz munchkin Jerry Maren put his hands and feet in wet cement today at Grauman’s – I mean TCL Chinese theater IMAX. The 93-year-old actor was introduced as the “oldest and smallest” person to receive the honor since Norma Shearer, Mary Pickford, and Douglas Fairbanks did the same thing in 1927. Under the big red pagoda this morning, 20 Feet From Stardom singer Judith Hill performed Somewhere Over the Rainbow, teen Nascar driver Gray Gaulding told the audience how infatuated he was with Maren, “Watchin’ him to his little lollipop dance and all that,” and how the film was one of his favorites, and then city councilman Tom LaBonge took the stage. “Every time I give a proclamation,” LaBonge declared. “I feel like you guys welcoming Dorothy to Oz.” With that, Maren planted his feet in the mud and belted out his famous song. The restored Wizard Of Oz opens at the theater this Friday.