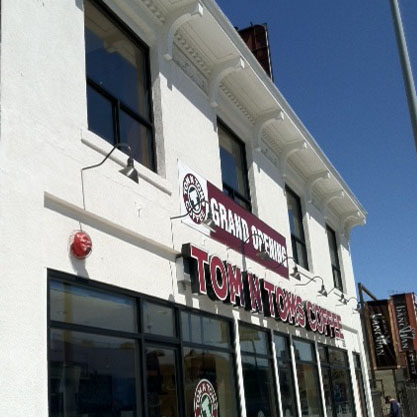 If you drive through Koreatown every day like I do, you’ve no doubt spotted those Tom and Tom’s coffee places opening up on every corner. Six outlets of the Korea-based chain have appeared in the last year and the latest one (on Western near Beverly) is located inside of City of Los Angeles Historic-Cultural Monument #959, the birthplace of See’s Candies. In 1921, former pharmacist Charles See set up shop here and began using his mother’s recipes to create those delicious confections we still enjoy today. See’s expanded rapidly and moved to a new location downtown and then to their current factory on La Cienega in 1946. The Western Avenue building had many other tenants before it closed in the early 2000’s. The shop was declared a monument in 2009 and just last week reopened as a Tom and Tom’s. The two-story café features your standard coffeehouse menu, but with unexpected treats like Tortilla Pizza and Caramel Bread. Unfortunately, they do not serve Scotchmallows or Peanut Brittle and you don’t get a free sample. The place is open until 2 a.m., which is a lot better than their factory, which is closed to the public. Well, closed to everyone except Ellen Degeneres, who took this tour and tried her hand at candy making.