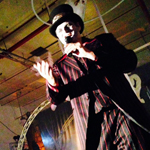 Producers Greg Wilson and Philip Solomon recently transformed an old warehouse next to the Derby Dolls rink into Way2Much Studios, a spooky cabaret that hosted CarnEvil. The event was a fundraiser for the Encore Foundation, a non-profit for injured performers. That’s how I learned about this fellow Wayne Houchin from Chico, who was terribly burned during a magic performance. Yikes! Even though some of the aerialists and acrobats at CarnEvil seemed like they might fly into the audience, it was a smooth show with a wide variety of variety arts including Hula Hoop champ Mat Plendl. I was lucky enough to be seated next to Bernie Shine,  Mark Wilson and Nani Darnell, pioneers of TV magic, who starred in The Magic Land of Allakazam, a Saturday morning magic series on CBS in the 1960s. They had great stories about the props at CarnEvil, many of which were once used in their tours. Their son Greg Wilson incorporated vintage items from the elder Wilson’s archive. Here’s a iPhone’s eye view of what went down.