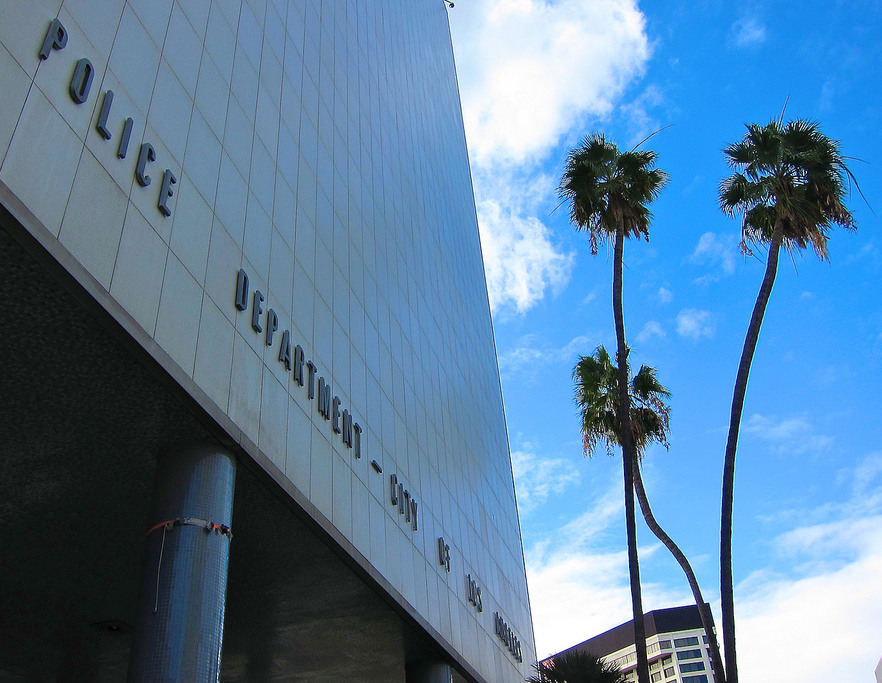 Hundreds of historic buildings throughout this county are threatened by causes ranging from abandonment to mansionization. These 12 are the ones keeping me up at night. Some are amazing marvels hidden behind board-up, some are tiny treasures versus development pressures, and some are just coolness owned by people who don’t care about coolness. They all add to our city’s history. Chase Bank
8150 Sunset Blvd., Los Angeles
Architect Kurt Meyer designed the zigzag roof and glass box of Lytton Savings in 1959 as the flagship of the S&L chain. A few years later, artist Ed Ruscha captured the architecture in his book Every Building On The Sunset Strip. Owner Bart Lytton was a patron of the arts in Los Angeles and hoped to open his own museum behind the bank. The complex, on the site of the historic Garden of Allah apartments, is now proposed for a high-rise development. Warner Pacific Theater
6433 Hollywood Blvd., Hollywood
This rococo movie palace was opened by Warner Bros. in 1928 and seated 2,350 patrons in opulent comfort. Underground Metro construction and the Northridge earthquake were cited as reasons for its closure in 1994. It reopened briefly as a screening room for USC and then a church before being shuttered again in 2013. Arturo’s
25720 Western Avenue, Harbor City
Eating in this charming post and beam marvel with a lush central atrium was like being invited to a Mexican dinner in a Case Study House. Run by the same family from 1960 to 2005, the restaurant closed in 2014 with the property  being marketed as a development site. Rockhaven Sanitarium
2713 Honolulu Ave., Glendale
The abandoned mental health center sits on more than 3 acres of gardens and is owned by the city of Glendale. Sufficient funds have not yet been identified for repair of the deteriorating buildings Hot Cha Café
957 E. 4th St., Long Beach
This rare example of a programmatic building in the shape of a coffee pot is deteriorating fast under an uninterested owner. Another giant object building, the Idle Hour in North Hollywood, is about to open after a $1 million dollar restoration. Parker Center
150 N. Los Angeles St., Downtown
Architect Welton Becket designed the Capitol Records building, the Pan Pacific Auditorium, and the Cinerama Dome. His firm also created the modernist police headquarters that served Los Angeles for almost 50 years. The facility was the TV home of Joe Friday of Dragnet, and completely state of the art and filled with artwork, including a 36- foot mosaic by Joseph Young depicting the architectural history of Los Angeles. The city is proposing demolition and replacement with an office tower. Jones Dog & Cat Hospital
9080 Santa Monica Blvd., West Hollywood
This sweet little streamline number has been hidden behind trees for so many years it’s almost invisible. Designed by architect Welton Becket in 1938, it was an innovative dog and cat hospital for many years. Developers wish to include it in a massive redevelopment along Melrose and Santa Monica Boulevards, between Doheny and Almont Drive. The Woman’s Club of Hollywood
1749 N. La Brea Ave., Hollywood
The 1904 Hollywood School For Girls hospitality house and the 1947 Hollywood Women’s Clubhouse are both victims of a dispute among the members of the dwindling organization and have been damaged by years of deferred maintenance. Fox Theater
115 N. Market St., Inglewood
Visiting this long-closed theater is like an adventure alongside Indiana Jones. With yellow work lights strung through the forlorn auditorium, and gaping holes in the plaster, it feels much more like an archaeological dig than a home for fine cinema, but as long as its standing it still has a chance. Fifth Church of Christ, Scientist
7107 Hollywood Blvd., Hollywood
Christian Science churches around the country have been sold and destroyed as the church loses members. A developer who envisions a high rise on the prominent site now owns their 1959 modernist ministry on Hollywood Boulevard. LACMA
5905 Wilshire Blvd., Los Angeles
When the Los Angeles County Museum of History, Science, and Art spun off the art division in the 1960s, they asked architect William Pereira to design their magnificent new home in the Miracle Mile. Three elegant pavilions floating on water became the backdrop for the explosion of art here in 60s and 70s. Later expansions hid the originals, which the museum wants to replace with Peter Zumthor’s black blob.