Home Uncategorized This Trippy Bernie Sanders Mural Might Be Made Permanent 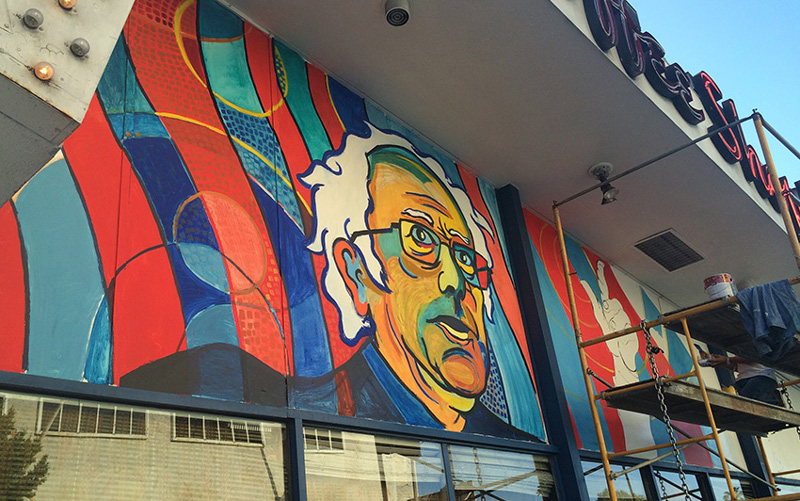 Next Thursday a city commission will decide if the Bernie Sanders murals on Johnie’s coffee shop at Wilshire and Fairfax should remain as permanent public art. The psychedelic swirls depicting the senator from Vermont were created by artist Dionisio Ceballos last May before the California primary election. The work, painted on the soaring plate glass of the mid-century landmark has been augmented by posters, stickers, and political protests inside and outside the 61-year-old restaurant.

Johnie’s opened in 1956 as Romeo’s Times Square, a googie coffee shop designed by Armet & Davis, the masters of the style. It was purchased by Dave Gold, founder of the 99 Cents Only chain, and closed in 2001. Mr. Gold passed away in 2013, the same year the building was declared a Historic-Cultural Monument. The Gold family still controls the landmark, and his son Howard made the request.

In recent years the site has been used as a filming location and as a staging area for construction of the Metro Purple Line. Preservationists hope that when the Metro is completed in 2023, a restored Johnie’s will follow. It’s hard to imagine how the (by then) vintage political art fits in to that plan.